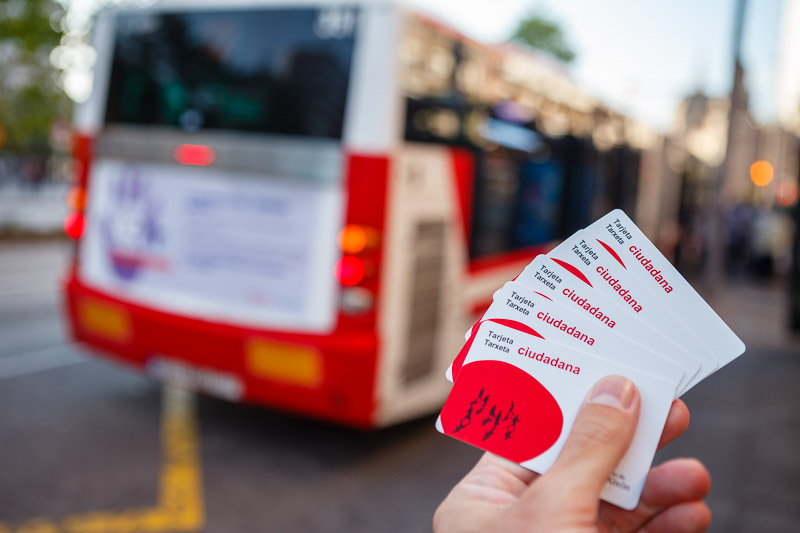 Europe, all in one

How plump is your wallet? Mine currently contains, apart from €13.55 dating back to March 2020, a local public transport card, two cinema cards, a gym card, a card with food benefits paid by my employer, two medical cards, my e-ID card, a bank account card, two library cards, and a museum card.

European cities at your fingertips

I invite you to count your cards, you might find out you have more of those than cash these days. How practical would it be if they were reduced to one? This is the first objective of the cities participating in the ‘Citizen Card’ lab: persuading more cities to introduce one citizen card allowing residents to access as many services as possible, including discounts and advantages.

Some European cities like Gijón, Rotterdam and Zaragoza already own a successful citizen card. “My citizen card is always with me,” says Laura González Méndez, International Affairs and City Branding at the Gijon City council, proudly pulling out the card from her coat’s pocket. Their citizens use the card on a daily basis to access services such as public transport, cultural spaces, sports facilities and social benefits. It offers people the chance to access public services where and when they want or need to.

And the cities involved in the ‘Citizen Card’ lab don’t want to stop there. If you are someone who had the chance to travel for work or pleasure, you might have also collected tourist cards and local transport cards of each city. It might make for a collectors’ fantasy, but it is surely not practical or convenient.

Imagine being a citizen of Gijon and using your local citizen card in Rotterdam to visit the Euromast, use public transport in Pau or admire the National Sculpture Museum in Valladolid. This is the vision that the combined efforts of our cities want to bring to life. To offer current and future generations a hassle-free, safe, secure and convenient solution to roam between European cities with only a smart card or app in the palm of your hand to make it all possible.

“We were inspired by the Interrail,” says Daniel Sarasa, Urban Innovation Planner at the Smart City Department at Zaragoza City Council, “which really created Europe, alongside other interesting and transformative programmes like Erasmus, allowing a generation of people to discover Europe. We wondered about creating the Interrail for cities, so that a person with a ticket or a pass for his or her city is automatically granted access to equivalent services in other cities.”

It is not just Interrail, the health systems have similar agreements to cover your health insurance in other EU countries, and services like the eduroam network, which provides internet connectivity at universities around the world, are more and more common. Not to mention private companies that have developed soft mobility solutions like e-scooters in several European cities and are therefore accessible through the same app everywhere.

In the future, cities want their residents to have the same kind of experience when interacting with them: access services when they want and where they want without having to share too much data, pay extensive fees, encounter bureaucracy, or give up their privacy completely.

Gijon was one of the first cities to introduce a citizen card back in 2002. “At the time, it was revolutionary to have all the services of your city in one card,” says González Méndez. Today, with around 98% of its population using it, the card has integrated the daily life of Gijon’s residents who use it to access and pay for more than 100 actions grouped under 20 services linked to the local administration.

“It’s also a powerful tool from a politician’s point of view,” says González Méndez “because it can help change behaviours. For example, if the mayor wants to increase the use of public transport, we can create a discount on the card for people who use public transport, which will encourage people to use it more.”

Public transport, bike sharing schemes, public swimming pools and libraries, as well as recycling bins can all be accessed with Gijon’s citizen card. Although all citizen cards look the same to avoid stigmatisation, the profile connected to each is personal. “The profile is very important as depending on who you are you have different accesses to services,” explains González Méndez. “For example, an adult will not have the same price to access services as a child.” This means that to an external observer everyone is the same because there are no symbols to distinguish a card from another. So, someone receiving unemployment benefits can go to the museum with the card and pay the reduced price without anyone but the system knowing. This solution encourages people to take advantage of the services without fear of being labelled.

Even if not immediately visible on its surface, cards such as Gijon’s collect a fair amount of data to be able to provide its services. “With data from the citizen cards we can improve our services,” says González Méndez. “For example, if we notice an increase in the use of bus number 10 by people with wheelchairs on specific times, we can adapt our busses with more spaces for people with reduced mobility.”

The collected data allows the city to make its residents’ life easier, but some might raise privacy concerns. “In the case of a citizen card it is your local administration that collects the data,” reassures Sarasa “they comply with all European regulations and [the European General Data Protection Regulation] GDPR, so you have your access rights and all the access related to privacy guaranteed.” The administration works with aggregate data – combined data disconnected from individual and personal data. For example, the local administration in Gijon knows the number of card holders that are also under social benefits, but they cannot easily cross check the numbers with the names. “It is safer than most private apps that everyone uses nowadays,” adds Sarasa.

In the perspective of a European citizen card, cities working on the ‘Citizen Card’ lab all agree that it would not only have to follow European standards for privacy and data use but respect a set of citizen data principles such as ensuring citizens have access to and can manage their data, as well as influence how it is collected and used. The data will also stay at local level, meaning that even though the European citizen card will be used in several cities across Europe, each city will manage the data of its residents. “Cities will communicate just in terms of permission,” explains Sarasa. “If the city of Brussels tells Zaragoza that users with certain IDs are ‘certified’ users of the card in Brussels, they will have permission to use services in Zaragoza. That’s all Zaragoza needs to know.”

Gijon, Zaragoza and Rotterdam have brought their experience to the table and technological developments in the past years have made it increasingly easy to imagine and achieve the dream of a European citizen card, however there are still obstacles.

“Sometimes the problem is not technical, but a matter of intention, political relations,” says González Méndez. Integrating services that are managed at regional or national level for example can prove to be difficult. In Zaragoza, for example, to integrate the national railways in the citizen card, the local administration had to reach out to the metropolitan consortium of transport as a mediator to find an agreement with the national government.

“We don’t need to try and change the world in one day, we can start with some easy wins,” says Sarasa. Such a win people can easily get behind can be creating a European citizen card for mobility services. Standardisation and interoperability are improving in the sector, and mobility services are increasingly running on the cloud. Many Mobility as a Service companies are already cross-European, so it would make sense to start, for example, with e-scooters or public shared bike systems.

The possibilities are endless and still need to be explored. Cities like Valladolid and Pau, who participated in the ‘Citizen Card’ lab but don’t have their own card yet, are making plans for the future based on the lessons learned from the lab.

“The city of Valladolid has now embarked on the process of deploying a citizen card,” says Pedro Touya Mata, Innovation Projects Manager at the Agency for Innovation and Economic Development in Valladolid. “The Citizen Card lab has been a very useful experience to take a step back from our own requirements and issues and broaden our vision, taking into account other more advanced cities’ concerns, experiences and best practices. This will help us to head our next steps in the right direction: the interoperability direction.”

Pau has offered to base the development of its card on the principles and the structure drawn in the ‘Citizen Card’ lab report, and will collaborate with Zaragoza to test intercity use. Pau and Zaragoza have been twin cities for thirty years and this project would be an opportunity to reinforce cross-border cooperation. Combining an ongoing European collaboration between Zaragoza University and Pau University to create a cross-border student card and the initiative from Pau’s local authority to create a citizen card, the project hopes to get some funding under the Interreg programme in 2022.

“We want to make the most of existing experiences and initiatives,” says Valérie Demangel, Director of European and International affairs in Pau. “The ‘Citizen Card’ lab is an example of how we can build a European citizenship by exchanging experiences to be used in a very concrete project that will benefit both cities and citizens.”

So far, the ‘Citizen Card’ lab has identified challenges and barriers, and pointed out opportunities to bring its vision of a citizen card to life. There are many steps left, but the wheel is in motion and residents in Pau and other cities might soon have a few less cards in their wallets.

The ‘Citizen Card’ lab is an initiative of the Knowledge Society forum of Eurocities. The following cities were involved in the lab: Zaragoza (mentor city, with Carlos Alocén and Ana Jiménez as key people helping to build the local and European dimension of the citizen card), Gijon (mentor city), Valladolid, Porto, Bratislava, Pau, Eindhoven, and Rotterdam.