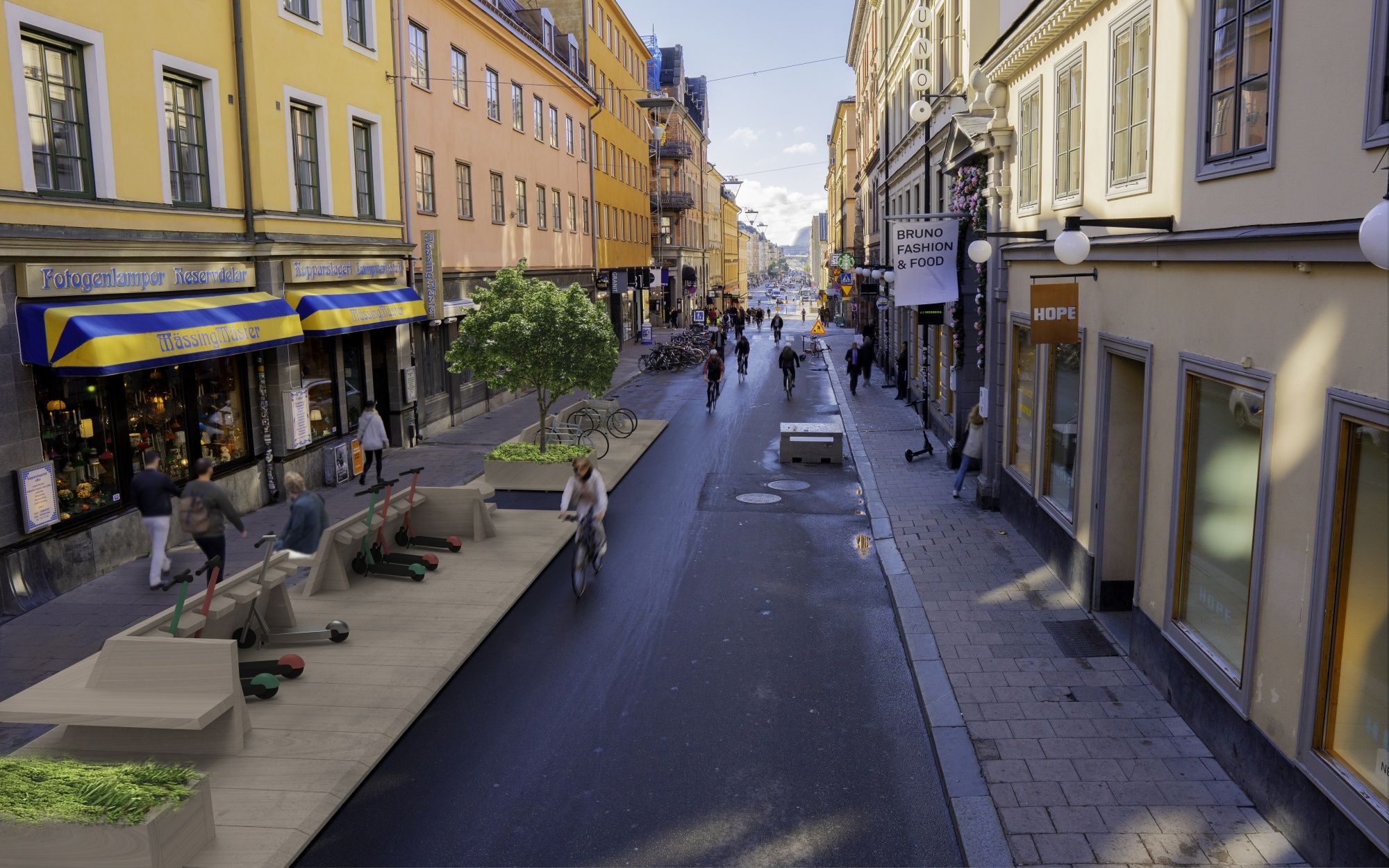 Make Way for the ‘One-Minute City’

Make Way for the ‘One-Minute City’

Feargus O'Sullivan is a writer for Bloomberg CityLab in London, focused on European infrastructure, design, and urban governance.

While the “15-minute city” model promotes neighborhood-level urban planning, Sweden is pursuing a hyper-local twist: a scheme to redesign every street in the nation.

In 2020, as pandemic lockdowns forced billions of people around the world to become intimately familiar with their neighborhoods, one of the hottest ideas in urban planning was the “15-minute city.” A vision for a decentralized urban area that allows residents to meet their daily needs within a quarter-hour walk or bike from their homes, the concept has been pursued as a means of cutting greenhouse emissions and boosting livability in a host of global cities — especially Paris, where Mayor Anne Hidalgo has embraced the model as a blueprint for the French capital’s post-Covid recovery.

Now Sweden is pursuing a hyperlocal variation, on a national scale. A plan piloted by Swedish national innovation body Vinnova and design think tank ArkDes focuses attention on what Dan Hill, Vinnova’s director of strategic design, calls the “one-minute city.” It’s a order of magnitude smaller than other recent think-local planning conceits. While Paris works with a 15-minute radius and Barcelona’s superblocks with nine-block chunks of the city, Sweden’s project operates at the single street level, paying attention to “the space outside your front door — and that of your neighbors adjacent and opposite,” Hill says.

Called Street Moves, the initiative allows local communities to become co-architects of their own streets’ layouts. Via workshops and consultations, residents can control how much street space is used for parking, or for other public uses. It’s already rolled out experimentally at four sites in Stockholm, with three more cities about to join up. The ultimate goal is hugely ambitious: a rethink and makeover of every street in the country over this decade, so that “every street in Sweden is healthy, sustainable and vibrant by 2030,” according to Street Moves’ own materials.

Unlike the 15-minute city concept, Sweden’s one-minute city model is not about meeting the needs of all city residents at a hyperlocal level — that would overlook fundamentals like public transit, job access, or specialist health care. Instead, the spaces just beyond the doorstep are ideal places for cities to start developing new, more direct ways of engaging with the public, Hill suggests. They are a filter and a portal to the wider world; the atmosphere they generate and the amenities they contain speak volumes about how a community operates and what it values. “Everyday infrastructures like streets hold the keys to our possible cultures,” Hill says.

By rethinking these patches of pavement as critical connecting spaces for communities, the project seeks to break through assumptions — as prevalent in Sweden as elsewhere — that address streets primarily as places to move and store cars. The micro-focus on the sliver of city outside your door, Hill says, can be a wedge to wider urban transformation. “Here, you have the most regular and direct participation, responsibility and interaction, merely propped up on propinquity.”

Though Street Moves’ first steps predate 2020, its choice of focus seems doubly relevant in the wake of a year when stay-at-home orders and street demonstrations reinforced a sense that our immediate neighborhoods are platforms where we must tackle and overcome the most fundamental of social hurdles. While its mix of removing car space and increasing community consultation may soundtoo utopian to be imitable in the U.S. or elsewhere, the basic tools Street Moves uses are American in inspiration — street furniture units based on the “parklet” model.

Vinnova’s plan works like this. With design firm Lundberg Design, the project has developed a kit of street furniture, designed to fit the dimensions of a standard parking space and built on hard-wearing pine decks. These units, inserted into the curb space, can be fitted depending on need with seating planters, bike or scooter racks, children’s play spaces or electric car charging stations attached. Easily connectable, the deck panels can either be stand-alone units, or configured to flank an entire street. According to Hill, the concept “draws inspiration from things like Lego or IKEA — or Minecraft — where you have a consistent system that can be adapted or hacked, remodeled, added to.”

While municipalities may provide their own versions of this toolkit, the design of each street is based on workshops and conversations with local residents — including schoolchildren. Streets near transit stops might favor more bike parking, while those with cafés could opt for more seating. Some units might emphasize tree-filled planters, others play spaces. Piece by piece, these installations can transform streets into sites of sociability and mixing, joining up steadily into neighborhoods where the space used daily by residents extends little by little out into the open air.

The community design process matters as much as the street elements themselves, the project’s leaders emphasize. The installations are easily replaced, adapted or removed, making them provisional propositions instead of one-size-fits-all permanent solutions. Some could be experiments that eventually lead to more extensive redesigns; others might be seasonal. “The most important things about these prototypes we’ve made is that they could all be the wrong thing,” says Kieran Long, director of Arkdes. Their real function, he says, is “to allow us to have a conversation about the future of streets with passers-by, people in the area, with school kids who hang out on them, people with electric bikes and scooters and so on.”

In this way, discussions about design that might feel abstract or unfamiliar to many become concrete and tangible. Residents can see some of their wishes for their environment made real, on the very small small scale of the project area. Sweden’s streets, Vinnova says, can become “an innovation platform for rapidly and powerfully addressing climate resilience, public health and social justice combined.”

None of this direct engagement and transformation can happen, however, if cities themselves don’t have concrete ways to carry it out. Right now, many cities charged with the daily business of trying to collect garbage and keep schools running don’t, with some good reasons, necessarily have the firing of a new political imagination high on their agenda. In Sweden, where the government’s early reluctance to institute coronavirus lockdowns proved disastrous, the pandemic is further complicating this challenge — but it could also be contributing to a willingness to press the reset button.

It’s not, after all, just inertia that prevents them from redesigning all their streets. Municipalities face pressure from the car-dependent to maintain ubiquitous vehicle access across the city, and often rely on parking revenue to fund other services — services that even people who want to reduce parking spaces might sorely mind seeing underfunded. For a project like this to work, it thus has to calculate how cities can reduce parking without hollowing out their budgets, and appease motorists by giving people an amenity that seems to compensate for parking loss.

“We are working with Stockholm’s highways department with a set of key questions,” says Long. “What is the annual revenue for a parking space? What kind of investment do you need to give that up? Where are you willing to meet that? Is that reproducible? If you can take one on every street, can you take four? Is there a limit?”

The art of the possible

But the doorstep is a great place to start in engaging with people’s daily lives, and in incorporating their wishes into a wider machine of urban management. “Clearly other social infrastructures also fundamentally shapes possible futures,” says Hill, “but it’s hard to conceive of a new political imagination being fired without open, generative street cultures.”

This process is still in its early stages. So far, Street Moves has carried out experimental redesigns of four streets in Stockholm, and will expand in early 2021 to sites in Gothenburg and Malmo. It’s also in discussions with other cities including the far-northern city of of Umeå, demonstrating that seasonal weather extremes aren’t an inherent barrier to creating livelier public spaces. The lessons learned in these early stages will help the project’s roll out, as findings from the initial projects will be funneled into a handbook that will guide municipalities into the key processes and issues necessary for the transformations.

“The scaling stuff is important,” says Hill. “If you do it at the city level, you might just end up doing Stockholm or Gothenburg. We are a national agency — we’re interested in changing a system, and understanding that all streets are connected.”

This kind of grand transformation might appear to be only relevant for a country such as Sweden, a state whose social and environmental policies are often the envy of progressives elsewhere. Swedish law has committed its cities to become carbon-neutral by 2045, making an ambitious national street-redesign campaign that de-emphasizes car use more of a feasible prospect. But the Street Moves project’s goals are nonetheless far from alien to U.S. cities — Hill cites Ron Finlay’s Los Angeles curbside gardens as an inspiration, for example. And during the many months of the Covid crisis, U.S. restaurants and retailers have been claiming pavement for semi-enclosed “streateries” and other installations, demonstrating the neighborhood-changing power a few strategic street tweaks can have.

Indeed, under lockdowns — which, as previously mentioned, Sweden itself never implemented — the importance of maintaining safe public space and making room for essential services close to people’s homes has become ever clearer. Likewise, the Black Lives Matter movement has focused fresh attention on how, via planning decisions and policing strategies that are shot through with racism, the streets of U.S. cities do not currently offer equal access and security to people of color. These same streets are also where protesters have gathered to push for change, where a concrete, ground-up politics of resistance has shaped itself. The importance of streets as sites for countries to articulate and solve their problems should not be disregarded.

Those struggles may seem very far away from a Swedish parklet project, but the example of Street Moves does represent a modest attempt to give urban residents more direct control over their surroundings, in ways that cities internationally would do well to observe. If the most urgent crises of this era — climate adaptation, social cohesion, the state of democracy — have arrived right outside our doorsteps, perhaps it makes sense to claim that space as the starting point for change.

Cover photo courtesy ArkDes - Sweden’s Street Moves project aims to introduce adaptable curb elements like this scooter-parking and seating unit to every street in the nation by 2030.