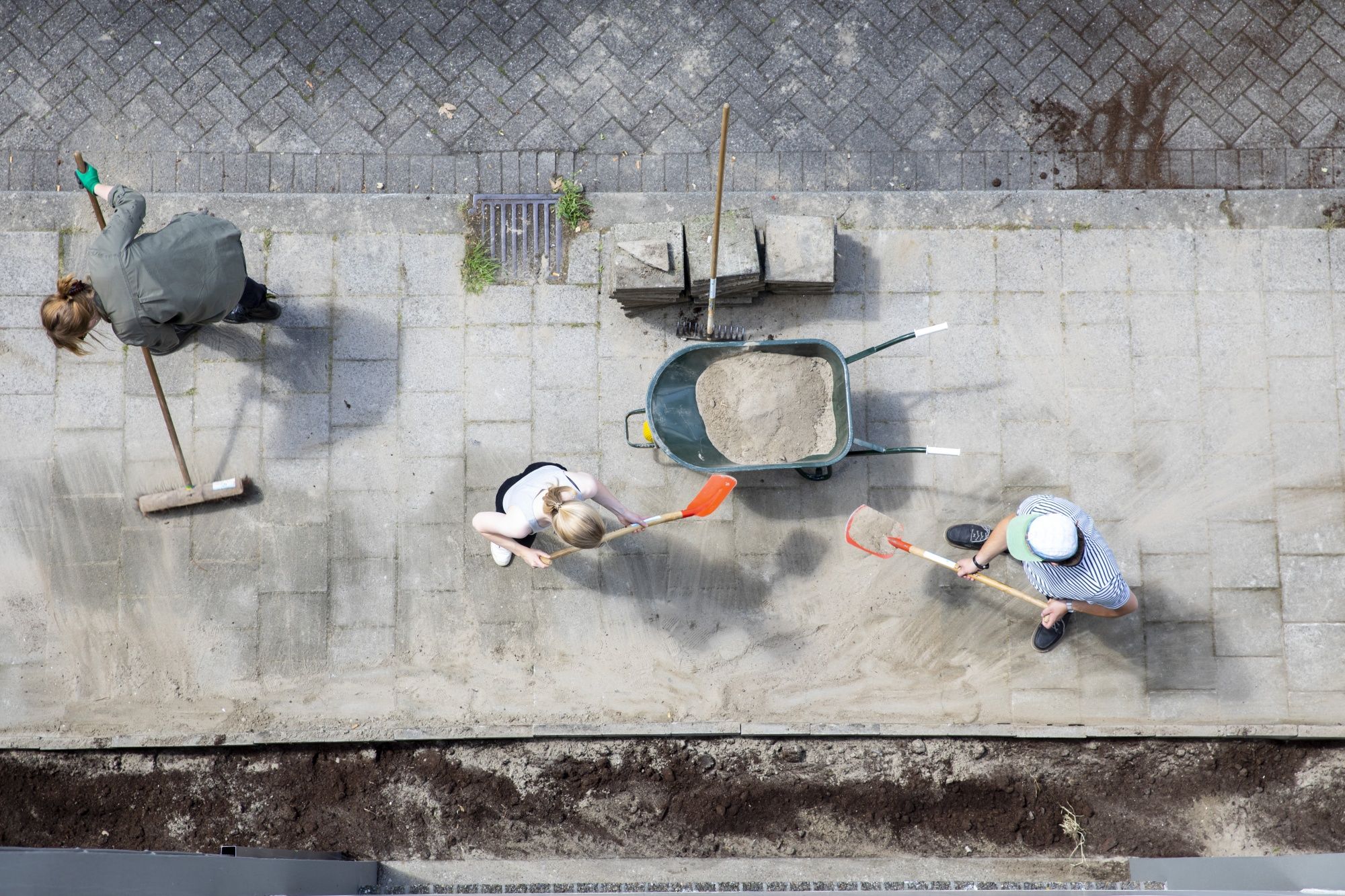 One Way to Green a City: Knock Out the Tiles - How Dutch Cities are Creating More Green Space

One Way to Green a City: Knock Out the Tiles

Removing the Netherlands’ ubiquitous tiles from front gardens is part of a broader initiative to expand green space in several cities. ​

Walk down a block in any neighborhood of Rotterdam and chances are it will look greener than just a few months ago. Tiles that once lined the front gardens of many apartment buildings, homes and offices have been ripped out and replaced with plants, bushes and trees.

It’s a small but notable shift to the streetscape in a country with an affinity for tiled gardens. And it’s no coincidence this change came en masse. It was part of a green initiative that channeled an age-old rivalry between two Dutch cities.

In a head-to-head tile-popping competition, the Dutch capital of Amsterdam took on Rotterdam but came up short. Rotterdam defeated its big brother with a whopping 47,942 tiles removed over Amsterdam’s 46,484. As the battle raged, councilors in both cities were briefed daily of the results, and pushed their citizens via social media to pick up the speed. “The rivalry between the two cities is often something negative, but was used in a positive way this time around,” said Eva Braaksma, whose organization, Frank Lee, coordinated the event on behalf of several groups. One of them was Urgenda, an NGO famous for its landmark lawsuit against the Dutch government that led to a court order for a 25% reduction in CO2 by the end of 2020.

The Netherlands was not even close to reaching its court-ordered emissions goal, and the tile removal will likely contribute just a tiny fraction to that total: Urgenda estimates that out of 17 megatons necessary to reduce the Dutch footprint by 25%, tile removal will account for about 0.1 megatons if 3% of open public places are de-tiled and replaced by plants and trees.

But Bert Wijbenga, city councilor for the liberal right party in Rotterdam, says the tile popping is “less about adding volume” and more about public education: “involving the citizens in the green ambition.” It’s also part of a broader goal to dramatically expand green space in the city to withstand the effects of climate change. As extreme heat, flooding, droughts and biodiversity loss become increasing problems, exchanging paved impermeable surfaces for porous surfaces, plants and trees will be a key part of counteracting these challenges, particularly in cities.

“The biggest impact of climate change will manifest itself in the city,” says Tim van Hattum, head of the Green Climate Solutions Program at Wageningen University & Research. “We must move to a nature-inclusive redesign of how we treat the world and build our cities.”

Rotterdam, a city surrounded by water, has been ahead of the curve in tackling some of these impacts, particularly flooding: The Netherlands’ intricate systems of levees, barriers and reinforced dunes that protect Dutch coastlines have become a global example of how to live with water as other cities have faced more extreme weather events.

But even in the Netherlands, it’s a challenge to keep up with changing conditions, Wijbenga says: “Water management always was essential in our city but climate change has significantly increased this.”

Now in addition to keeping water out, Rotterdam also faces an opposite challenge that is newer for the city: bringing more water in to preserve sources of drinking water and avoid periods of drought.

“Currently all rainwater is directed out of the city via the sewage system,” says Van Hattum. “This implies that water is a burden we must get rid of, but it actually is an asset, and must be treated that way.” Removing impermeable surfaces like tiles and concrete enables the rain to drip down into the groundwater, where it is available to use.

Rotterdam has a goal of creating 20 new hectares (49.2 acres) of green space by 2022, and Wijbenga estimates that tile removal in 2020 accounted for about a half hectare. The “difficult meters” of extra greenery have to come from elsewhere — the vast majority likely from green rooftops and public places.

Several rooftops in the city have already been set up to take in and buffer water for other purposes. The local football club, Sparta, collects rainwater to reuse on its field. And the Benthemplein water square has been a particular focus of international attention: When the sun is shining, this square acts as a recreational area with a basketball court and other amenities, but during heavy rain , the square — which is below street level — acts as a temporary basin to gather excess water. The water is stored underneath the square and is used for other purposes, while preventing flooding of the area.

Despite global admiration of Rotterdam for these types of creative initiatives, Van Hattum is advocating for more natural ways to tackle climate challenges in the city. Innovative solutions like the water square help to solve a specific issue of preventing flooding, he says, but it’s still an artificial concrete container that intervenes with the natural system’s ability to deal with heavy rain on its own terms.

For Netherlands cities, an initiative like tile-popping is an effective way to promote these kinds of natural green spaces. Not only do they empower residents to create more permeable surfaces on their own properties; they can shift public perceptions about what a city looks like. The Netherlands has been a country of tiles: According to an analysis of aerial photos in 2020, half of all gardens are tiled in some shape or form. But as part of the tile removal event, the neighborhood de Kop van Zuid in the south of Rotterdam managed to gather 70 residents to roll up their sleeves green their street, resulting in the longest front garden of the country at 210 meters (689 feet).

This kind of shift in perception may be necessary to make the key urban redesign that Van Hattum says is really needed: de-emphasizing cars.

“The city of the future will provide way less space for cars, Van Hattum says. “Walking, cycling and public transport will be central. That will provide great opportunities for more green in the city: smaller roads and less parking spots are needed and green corridors for walking can be planted instead. We really have to pull nature into the city instead of treating them as two separate entities.”

Cover Photo by Fleur Beerthuis - Rotterdam has removed almost 50,000 tiles and replaced them with more porous surfaces and greenery.