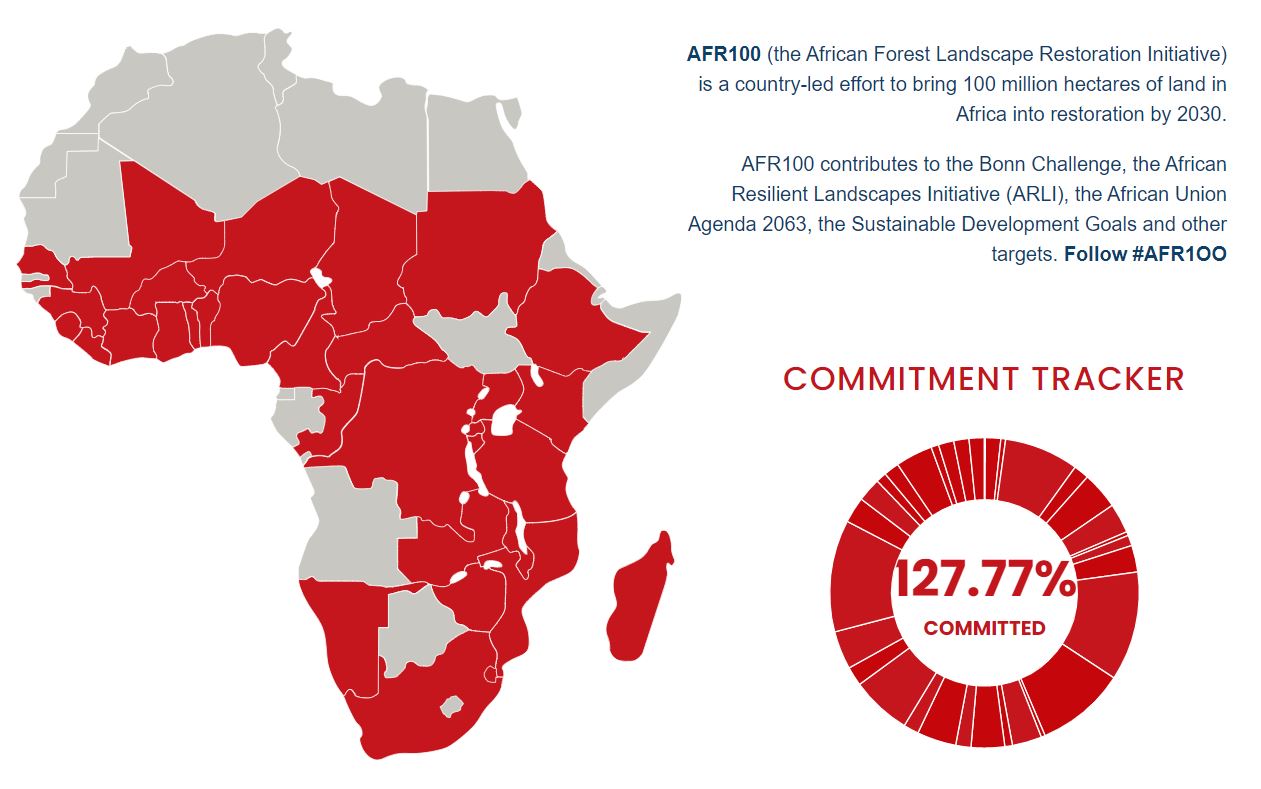 Press Release by the AFR100 Initiative | Originally posted on November 2, 2021

This press release was retrieved from the World Resources Institute (WRI), and was reposted from the AFR100 Initiative.

GLASGOW (November 2, 2021)—By COP27, which will be held on African soil, funders must invest $2 billion in AFR100, the continent’s locally led campaign to restore vitality to 100 million hectares of degraded and deforested land. Jeanne d’Arc Mujawamariya, Minister of Environment of the Republic of Rwanda; Nancy Tembo, Minister of Forestry and Natural Resources of the Republic of Malawi; and Mohammad Abubakar, Minister of Agriculture and Rural Development of the Federal Republic of Nigeria issued that challenge today at COP26.

The African Development Bank, Government of Germany, Global Environment Facility, Bezos Earth Fund, the Global EverGreening Alliance, and Green Climate Fund responded, announcing their plan to significantly invest in land restoration by 2026 and have called on their peers to join them in mobilizing that $2 billion in investable capital by COP27 in November 2022.

“Africa is home to the world’s greatest restoration opportunity, with 700 million hectares of degraded land that can be restored. Africa is the continent most dependent on the land for livelihoods, and most vulnerable to climate change. Africa must therefore lead the way. We warmly welcome partnership with ambitious funders like the Bezos Earth Fund,” said Ibrahim Mayaki, CEO of the African Union Development Agency (AUDA-NEPAD).

In the wake of the COVID-19 pandemic, which could push an estimated 30 million Africans into extreme poverty, land restoration — with a return of $7-30 for every $1 spent — has become a critical tool to improve food security and create sustainable jobs. The impacts of climate change make these types of solutions all the more urgent: The most recent IPCC report shows that several African regions like the Sahel will experience rising temperatures, exacerbating the vulnerabilities of people and nature. If desertification continues to advance unchecked, the decline in revenue from cereal crops alone could cost people in Africa $4.6 trillion through 2030.

It’s clear that Africa needs to massively and quickly restore nature and farmland to reduce poverty, reverse biodiversity loss and store planet-warming greenhouse gases — and local action is the only path toward success. An initial $2 billion investment in the work of NGOs, entrepreneurs and government-led projects could catalyze $15 billion of funding. That larger sum could begin the restoration of a potential 20 million hectares by 2026 and bring an estimated $135 billion in benefits to 40 million people.

“Local communities own and manage nearly 70% of Africa’s land. That is why a future where rural Africa’s landscapes are fully restored is only possible if we believe in and fund the work of thousands of community groups and leaders, especially young people, women and entrepreneurs,” said Wanjira Mathai, Vice President and Regional Director for Africa, World Resources Institute (WRI), and Friend of COP26.

Combined with a robust financial architecture anchored in Africa that can channel million-dollar investments to people restoring land, in-depth technical assistance, and a comprehensive system to track progress, these investments would kickstart the second phase of AFR100. Thirty-two countries have joined that engine of restoration replication and pledged to restore nearly 128 million hectares since COP21 in 2015.

“Africa is where the opportunity is the greatest, where the need is greatest, and where vulnerability to climate change is greatest. It is also where political commitment is increasingly the greatest, as heads of state and governments more and more recognize that investing their natural capital has one of the highest returns,” said Andrew Steer, President and CEO of the Bezos Earth Fund. “With enough flexible capital, the blossoming of a thousand locally led projects and businesses can realize the AFR100 vision of high-quality restoration work that builds climate-resilient and thriving rural communities. Please count on us!”

“One billion dollars in funding will support landscape restoration, with an initial focus on Africa and the U.S. Restoration efforts in Africa will include planting trees on degraded landscapes, revitalizing grasslands, and integrating trees into farmland,” added a press release issued by the Bezos Earth Fund. “This work will help drive critical outcomes that include climate benefits, food security, job creation, economic growth, soil fertility, and improved connectivity between protected areas to protect biodiversity. The Bezos Earth Fund will partner with Africa-owned partners, including AFR100, to deliver these benefits at scale.”

To start this new phase of AFR100 with local action, a group of funders (Bezos Earth Fund, One Tree Planted, Good Energies Foundation, DOEN Foundation, Lyda Hill Philanthropies and Facebook) announced an initial investment in these innovators. After receiving more than 3,200 applications for funding across 31 African countries, WRI, One Tree Planted and Realize Impact will provide 100 grants and loans of $50,000 USD to $500,000 USD to community-based non-profits and local businesses. The first cohort of 20 organizations that will receive capital from this “TerraFund for AFR100” was announced today (details here).

“Mayors know that local action is the cornerstone of transformative change,” said Yvonne Aki-Sawyerr, Mayor of Freetown, Sierra Leone. “Building up the capacity of entrepreneurs and community organizations is how we plan on growing 1 million trees by 2022. I am thrilled that AFR100 will help our champions realize their dream of turning our city into a ‘Treetown’ that will help our people thrive for decades to come.”

Partners will independently monitor and report on each project with a combination of field verification techniques and satellite monitoring with support from the new Land & Carbon Lab initiative.

“AFR100 presents an opportunity for both the private and public sectors to demonstrate large-scale transformative action to restore degraded land. That action would not only mitigate climate change, but also help secure millions of livelihoods and agricultural supply chains. Diversified financing instruments are needed now if we are to achieve this grand ambition by 2030,” said Charles Karangwa, Regional Head of Land Systems for Africa, International Union for Conservation of Nature (IUCN).

About AFR100
The African Forest Landscape Restoration Initiative (AFR100) is an African-led initiative uniting 31 countries to restore 100 million hectares of degraded land by 2030. It contributes to the global Bonn Challenge, the African Union Agenda 2063, the Sustainable Development Goals, the UN Decade on Ecosystem Restoration, and other targets. The African Union Development Agency (AUDA-NEPAD) serves as its Secretariat.