Building disaster resilience among the vulnerable

Building disaster resilience among the vulnerable

by ALVINA ERMAN and RUI SU | Originally posted on May 31, 2022 on World Bank Blogs

Natural disasters cause billions of dollars in losses each year, but the damage estimates don’t tell the full story of their impact. The gravity of any loss depends on whom it affects, and the poorest people typically bear a much larger brunt of a natural disaster’s consequences.  With climate change bringing more frequent and severe natural hazards, ensuring a resilient recovery for all requires a better understanding of the impacts that policies can have – and particularly on the most vulnerable people. Experience shows that a wide range of relatively low-cost and effective measures can save lives and protect hard-earned development gains in the wake of disasters.

One such measure is the Unbreakable Resilience Indicator developed by the Global Facility for Disaster Reduction and Recovery (GFDRR) and hosted by the World Bank.  Unlike typical disaster risk assessments that estimate expected asset loss, this indicator takes into account that $1 in asset losses does not mean the same to a well-off person as it does to a poor person. The indicator’s three tools ─ the country tool, the policy tool, and the advanced tool ─ measure the risk to well-being associated with asset losses and help a user understand several things:

The country tool provides a bird’s eye view of current conditions, such as where a country excels or falls short in different resilience factors. It is based on a simple model that calculates asset and well-being losses for multiple hazards such as floods, windstorms, earthquakes, and tsunamis. Socioeconomic resilience is then estimated as the ratio (0-100%) of expected asset losses to expected well-being losses. A larger socioeconomic resilience means that a country’s population can experience larger asset losses while maintaining its well-being. A resilience level of 50% means that $1 in asset losses from a disaster results in a loss of well-being equivalent to a $2 drop in national in income. 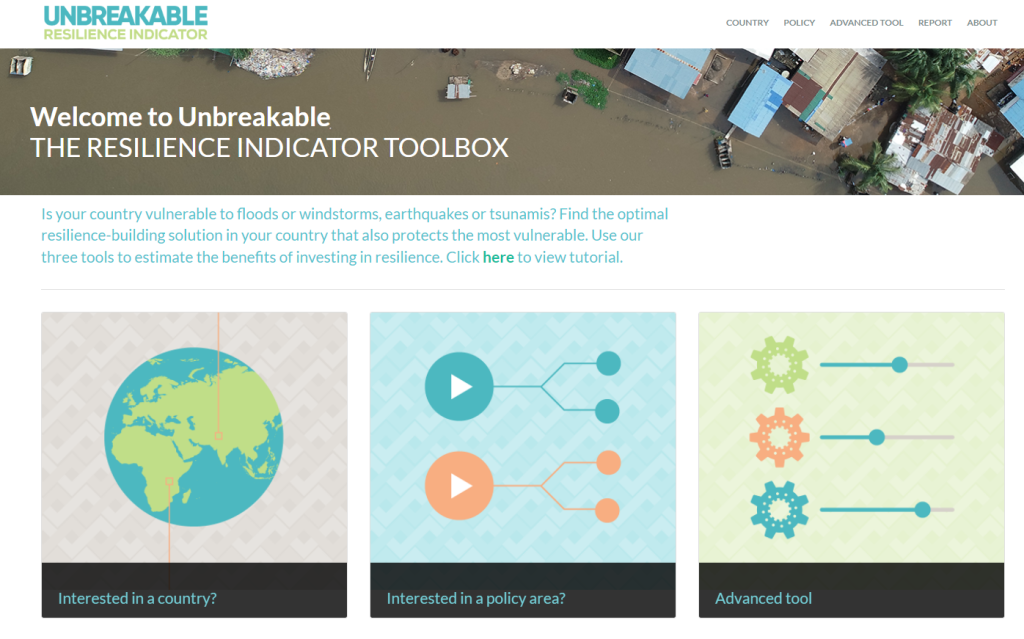 Take Malawi as an example. The country tool shows that assets equivalent to 1.01% of Malawi’s GDP are at risk from disasters, but because the country’s socioeconomic resilience is merely 59.6%, the risk to well-being is even higher, equivalent to 1.69% of GDP.  The tool reveals that socioeconomic resilience is lower because social protection in Malawi is far below global average, and people’s incomes are also meager. These shortcomings undercut people’s capacity to cope with disaster shocks, therefore magnifying disasters’ impacts on their well-being. The policy tool helps determine where to focus resilience-building efforts. It ranks the effectiveness of policy measures in terms of the annual avoided asset and well-being losses. Universal access to finance, for example, could reduce annual well-being losses in Malawi by 3.1%, or $7 million.

The gravity of any loss depends on whom it affects, and the poorest people typically bear a much larger brunt of a natural disaster’s consequences.

Beyond an individual country’s context, the policy tool can also compare the benefits of different policy actions across countries globally or within certain regions. For instance, the policy tool suggests that while the Philippines can avert the most asset and well-being losses in absolute terms if it implements a full-coverage early warning system, Cambodia could benefit the most in relative terms (as a percentage of current losses). That is, Cambodia can reduce its current well-being losses by 21% and asset losses by 20% with universal early warning systems, a remarkable contribution to strengthened resilience.

After understanding the country contexts and policy impacts, the advanced tool allows users to manipulate the input indicators to the model to evaluate the impact of specific policy actions and goals, in terms of their benefits. For example, for the Democratic Republic of the Congo, if we can decrease the poor’s exposure to riverine and coastal flood from 0.6% to 0.5%  and expand access to early warning from 40% to 60%, we can make a sizeable difference in disaster outcomes. The risk to assets (as a percentage of GDP) will be cut by 0.11 percentage points by these actions, and socioeconomic resilience will simultaneously grow by 6.64 percentage points. The synergies will result in the overall risk to well-being indicator declining to 1.30% from 1.69%.

At a time when we increasingly see how poverty and exclusion exacerbate the impacts of disasters, these accessible yet impactful tools enable policymakers to avoid the worst disaster outcomes and support equitable growth. We cannot afford to neglect the vast potential of disaster risk management to rescue the vulnerable from the consequences of climate change.