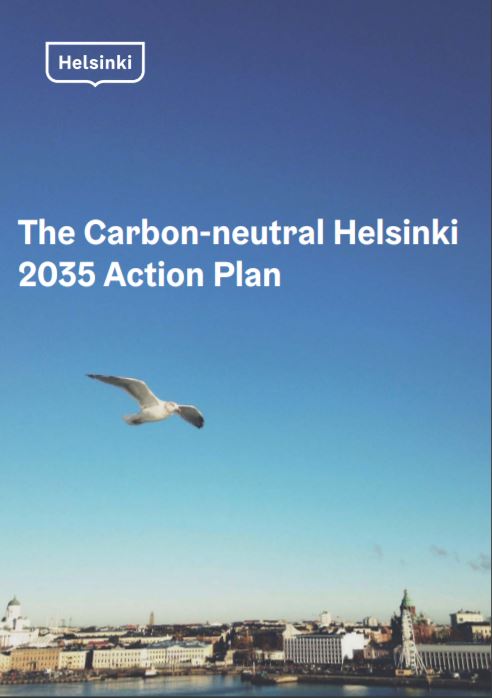 Helsinki is committed to doing its part in mitigating climate change. The objective of the Helsinki City Strategy 2017–2021 is to make Helsinki carbon-neutral by 2035.

This goal will be achieved by reducing greenhouse gas emissions in Helsinki by 80 percent. The remaining 20 percent will be compensated for by Helsinki taking care of implementing emissions reductions outside the city. The most significant sources of greenhouse gas emissions in Helsinki are the heating of buildings, electricity consumption, and traffic. The climate goals not only affect the City organisation, but also the residents and the organisations operating in Helsinki. Helsinki can become carbon-neutral through cooperation. The Carbon-neutral Helsinki 2035 Action Plan has been approved by the City Board. The Action Plan outlines how the emissions reductions may be achieved in practice.

Information on the state of the greenhouse gas emissions in Helsinki is based on the calculations of Helsinki Region Environmental Services (HSY). The total emissions in Helsinki have decreased by a quarter since 1990. Even though Helsinki’s emissions are on the decrease in the long term, emissions still need to be reduced more substantially and more rapidly in the future. The City of Helsinki is constantly growing, with approximately 8,000 new residents every year. The emissions of an average Helsinki resident are approximately 40 percent lower than the emissions in 1990 even though the population has grown by 150,000 since then.

The surveys conducted in connection with the Action Plan, carried out by Gaia Consulting Ltd and WSP Finland Ltd, provided additional proof that Helsinki could indeed become carbon-neutral by 2035. However, achieving the objective requires significant investments in the energy-efficiency of buildings, renewable energy, low-emission transport, and emission-free energy production. The City of Helsinki is directly responsible for some of the emissions reduction actions, but most of the actions require contributions from Helsinki’s residents, businesses and other organisations. To achieve its goal, Helsinki also needs support from the government, as well as an ambitious national climate policy.

The Action Plan presents the current climate actions of Helsinki, as well as the forecasts for 2030 and 2035. The actions required to achieve the emissions reduction goal are defined for different sectors. The Plan includes a description of the current state, the objectives, and the key emissions reduction actions for each sector. The sectors are the following: