Cities like Oslo, Helsinki and Copenhagen are working to clean up one of the world's most high-emission industries by striving for zero-carbon construction

The Scandinavian way to zero-carbon construction

Cities like Oslo, Helsinki, and Copenhagen are working to clean up one of the world's most high-emission industries.

Quiet, clean and green are not words you would typically use to describe a construction site. But the site at Olav Vs gate, one of the busiest streets in the heart of Norway's capital city, Oslo, was special. In a first of its kind in the world, all the machinery used on site – excavators, diggers and loaders – were electric.

Work began on the site in September 2019, converting what was once a hectic turning zone for the city's taxis into a new pedestrianised area. Locals may have initially raised eyebrows at what appeared to be just another inconvenient construction site, but soon it was clear there something very different about it. In fact, this was a pilot project for the first zero-emission urban construction site in the world.

"When I visited the zero-emission construction site I was extremely impressed," says Mark Preston Aragonès, a policy advisor at environmental non-profit Bellona. "I was looking at these big excavators that you generally associate with fumes and noise and general annoyances, but on this site, when the operator turned it on you couldn't tell the difference between when it was on or off. It was really impressive to see such big machines make such little noise."

Decarbonising the construction industry is something in which Oslo wants to lead the world. And it's with good reason

Using electric equipment in place of traditional diesel engines meant that everyone in the vicinity noticed a reduction in ambient noise and pollution. "We observed shops keeping their doors open towards the street, even when construction work was going on just outside on the pavement," says Philip Mortensen, a senior adviser at the City of Oslo's Climate Agency. "The workers also reported much better communication on-site due to lower noise levels, and that as a consequence the working environment felt safer." 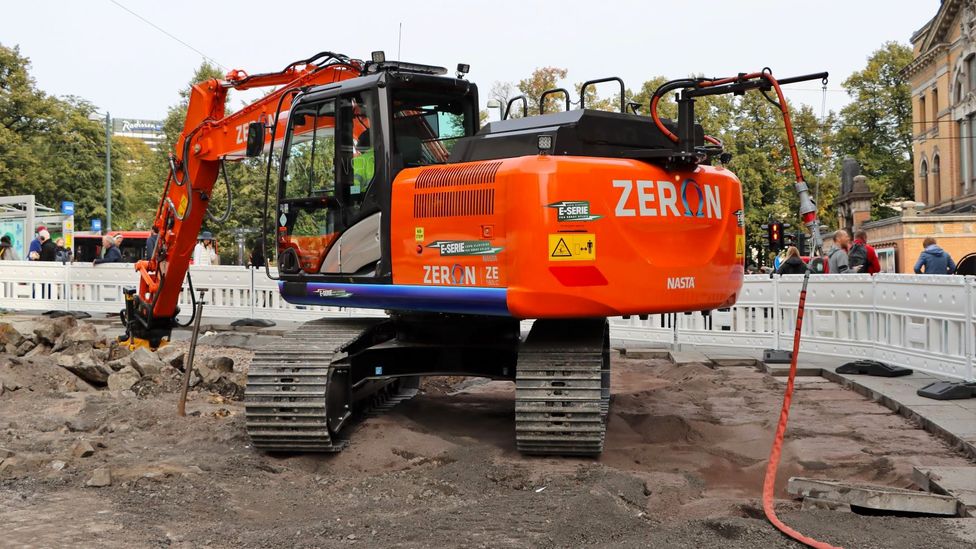 Decarbonising the construction industry is something in which Oslo wants to lead the world. And it's with good reason. At present, the construction sector alone is responsible for more than 10% of global greenhouse gas emissions. The impact of construction is even more evident when looking at CO2 emissions from energy use – with the sector contributing 38% of the world's emissions.

In Oslo, the picture is a little different, with construction responsible for 7% of the city's total emissions, though it still contributes significantly to local air and noise pollution. But with the Olav Vs gate zero-emission pilot site, the city is eager to keep improving.

Norway has the rare benefit of an electricity grid with 98% renewable energy, most from hydropower, which makes Norway an ideal testing ground for zero-emission sites

In total, by using electric construction machines, the Olav Vs gate pilot project was able to save 35,000 litres of diesel and the equivalent of 92,500 kg of CO2, compared to the use of regular machinery. That's the equivalent of taking 20 cars off the road for a year.

They were not able to make the project 100% emission free as they had some challenges, particularly with a propane burner that could not be rebuilt or replaced with an emission-free alternative. But the city insists it was still very happy with the result, saving 99% emissions compared to if the project had been done using regular diesel.

The city now wants all municipal construction sites to be zero emission by 2025 and all construction work, public or private, to be zero emission by 2030. Six more of Norway's biggest cities have also recently committed to the same goals as Oslo. Norway has the rare benefit of an electricity grid with 98% renewable energy, most from hydropower, which makes the country an ideal testing ground for zero-emission sites.

Nevertheless, the pilot project in Olav Vs gate is a statement to show the industry that an emission-free construction site is achievable and will, according to Oslo, be the future standard. To move things forward, the City of Oslo has been using its purchasing power as a strategic tool. Since 2019, public tenders for construction work, for example roads, schools, nursery homes, water and sewage pipes, have been awarded to those building with zero-emission machinery and trucks. 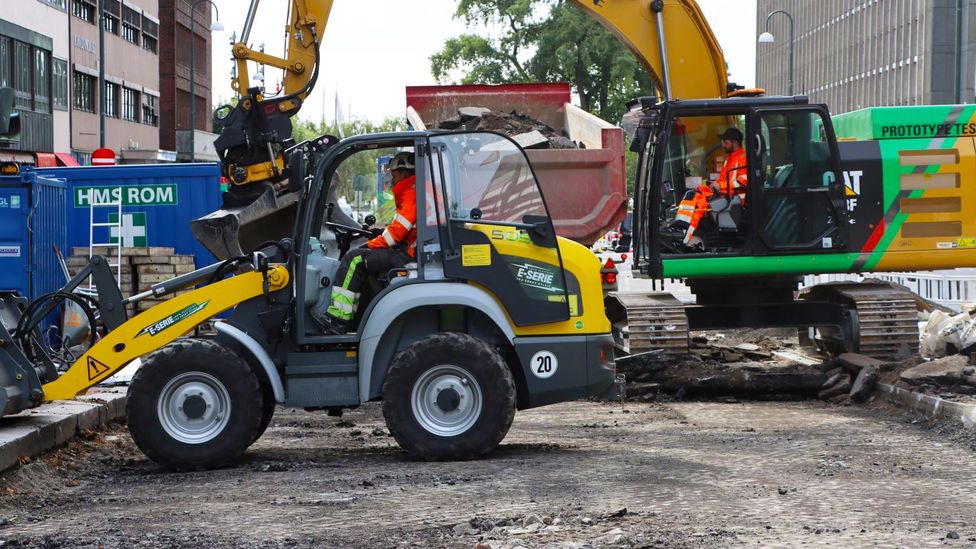 The City of Oslo is aiming for all its construction within the city to be zero-emission by 2025 (Credit: Climate Agency, City of Oslo)

If Oslo has taken the lead, it's been quickly followed by Copenhagen and Helsinki, which have also had zero-emission construction sites. Yet, overall, the construction industry is infamous for being resistant to change, and has historically been driven by lowering costs rather than greenhouse gas emissions.

"The machinery might be prohibitively expensive for some cities from an upfront capital cost point of view," says Aragonès. "This is because an electric machine can be twice as much as a diesel machine. If you retrofit it, then it might be two or three times more expensive."

Yet Aragonès says that the more expensive equipment can pay off. "You're not having to pay for diesel," he says, and the electricity required instead works out much cheaper. "So although you're having to spend a lot more upfront, you're saving a lot more during the operation." Electric machines offer other advantages, like being able to work later into the night or earlier in the morning as they generate less noise, which in turn can help to make money back.

In addition to equipment costs, another hurdle is ensuring a steady supply of power to operate the electric machines. "It's a definite challenge for some cities to get the appropriate amount of power to supply electric machines," says Aragonès. He says it is achievable with a little bit of creativity, but will ultimately need some changes in the industry. "If you're wanting to be plugged into the grid, you'll need to be drawing much more power from the grid. Unless you want to have some kind of battery container that you charge somewhere else and then you keep switching and bringing them in so that you can continuously power your machines." 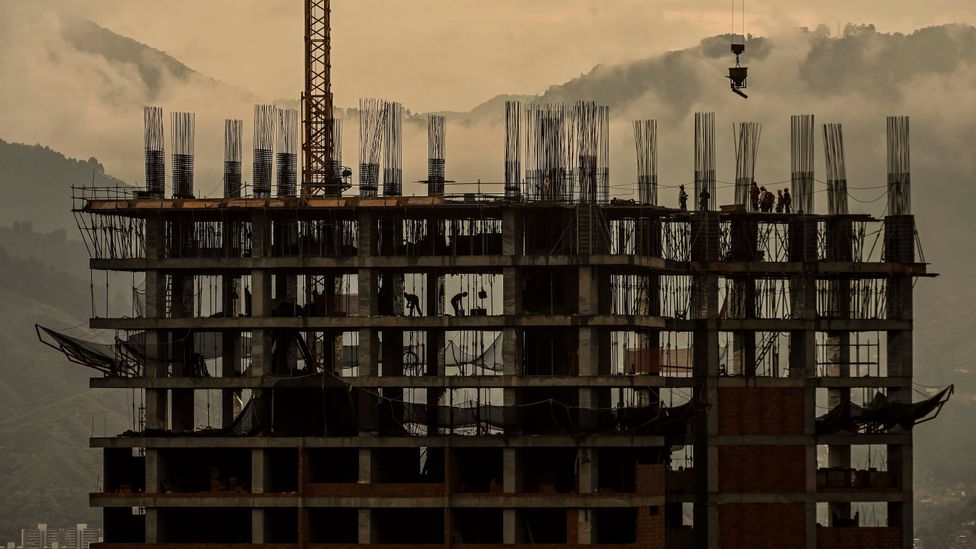 For the founders of Ampd Energy, which makes the Enertainer, the goal is to provide the infrastructure for the backbone of the electrification of the construction industry. Currently, the Enertainer is being used by 18 of the largest construction and property developers in Hong Kong. Typically, it powers cranes, hoists, welders and any other construction equipment which uses electricity. The makers of the Enertainer say it can reduce carbon emissions by 85% – for each deployment of a battery system to a construction site, it saves the equivalent of 200-400 cars' emissions. It can also generates 1/30th of the noise pollution of a diesel generator.

"So there is a lot of emissions that are given out during that time when it's not actually producing power. Batteries are much more effective at handling this. When it's not working, it's not working – it's just sitting there. When you need the power you can get the power almost instantaneously. So that's when you get big savings."

Sino Group, one of the largest developers in Hong Kong, has been using the Ampd Enertainer. As well as carbon savings, the unit has provided a lot of useful data, says Andrew Young, associate director of innovation, Sino Group. "We can link up a lot of Internet of Things sensors on site to this unit," says Young. "It enables us to do real time monitoring of equipment status. This gives everyone a means of attaining knowledge and data and we can speed up the decision making process through this data, which can ultimately improve the operational efficiency of the construction process."

The digitisation of construction sites has been gathering pace. "Knowing what's going on at a construction site, capturing data, and digitising the process is a big thing for the whole industry," says Young. "Any improvement in construction site process means big, big dollars. If you can save one, two, or three days and speed things up it's already big savings." 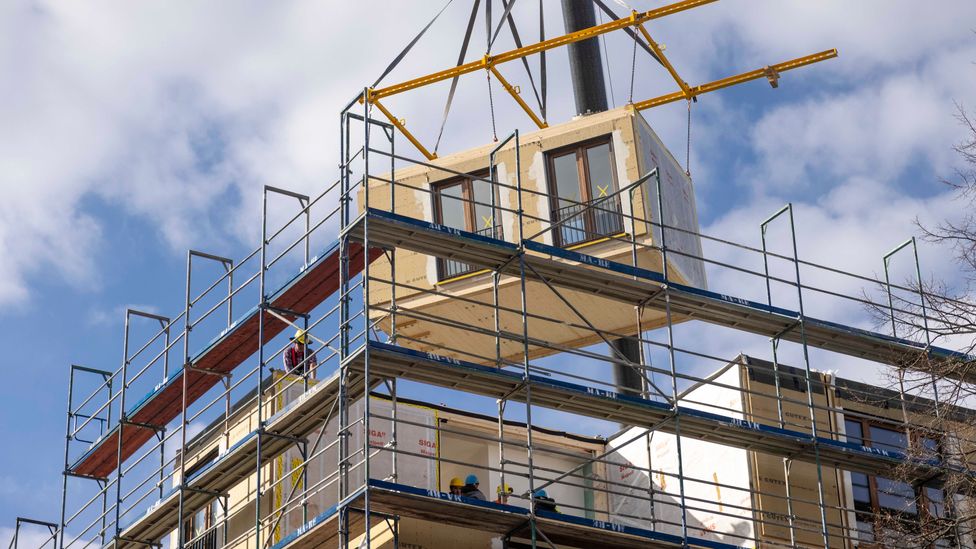 Modular construction, as well as using greener materials, is helping to reduce the emissions of construction beyond its machinery (Credit: Getty Images)

Another innovation looking to increase efficiency and reduce waste is modular construction. The process is where a building, or parts of it, are constructed off-site, which brings its own advantages. In Denmark and the Nordic countries, given they are located in the northern part of Europe with limited daylight in the winter months, builders don't have much time out in the field. Instead, many of the buildings are using a lot of prefabricated elements. This is a trend that actually reduces waste.

"When it comes to modular construction, safety, productivity and environmental impact, all of those things tie together," says Jochen Teizer, associate professor in the department of civil and architectural engineering at Aarhus University. "If I do offsite fabrication and then ship it, I improve all of those things; reduce the waste in the assembly process but also increase the safety for the workers. That's another advantage."

But while innovations like electrification, digitisation and modular construction are all helping the industry to decarbonise and reduce waste, they don’t always work together at the same time.

"The construction industry has a lot of stakeholders involved in the projects. I think that's one of the challenges we have," says Teizer. "From architects, subcontractors to contractors, a lot of inefficiencies happen with communication, where people design a project one way, but then it gets executed in a different way. I think it will take a generation to see change. It ties back to educating our next generation of engineering workforce out there. So we need the right tools."

Although slow, progress is being made. Building on the success of its first zero-emission urban construction site, the City of Oslo expects around 10 to 20 new projects launching this year will use heavy-duty zero emission equipment such as diggers, wheel loaders, trucks and drill rigs on site.

In addition, Oslo's target that all construction sites be zero-emission by 2025 has sent a strong signal, and many construction companies are making plans for this transition. Construction equipment manufacturers are beginning to produce more electric machinery. In fact, a database of electric machinery is available with a link to public information about those machines to make it easier for cities who are looking for such machinery, and to convince them to start doing this.

Meanwhile, the Cities Climate Leadership Group (C40) has launched a Clean Construction Declaration – which includes, amongst other commitments, a pledge to reduce emissions from construction sites. The declaration calls for procuring and, when possible, using only zero-emission construction machinery from 2025 onwards. Currently, around 40 cities around the world have signed up to the declaration, among them Oslo, Budapest, and even big cities outside Europe such as Los Angeles and Mexico City.

"Oslo is proof that zero emission construction is possible," says Mortensen. "Here at Oslo's Climate Agency, we see growing interest from different cities internationally in our work. Especially from dense cities, where many would benefit from clean construction."

With sprawling cities around the world showing interest, the hope is that more will join and building an emission-free future for construction may well be within reach.