Forests Near or Far Can Protect Water for Cities

Water is essential to human health and well-being. In cities, leaders strive to provide secure access to clean, safe and affordable water. In rural areas, farmers hope for adequate rain and healthy rivers to produce healthy crops. The coronavirus pandemic reminds us how critical clean water is to health and hygiene, as public health officials have urged frequent handwashing. And yet, the world is on the precipice of a historic global water crisis.

Rising temperatures and extreme weather events associated with climate change continue to pressure water systems and strain urban water infrastructure. Some scenarios suggest that by 2025, as many as 1.8 billion people will face water scarcity.

The situation is dire, but one asset is already at our fingertips: forests.

Within city limits, across local watersheds and even thousands of miles away, forests alter the movement, quality and availability of water. The world’s urban leaders need to account for the role of forests in securing clean water for residents and the agricultural lands that cities rely on. 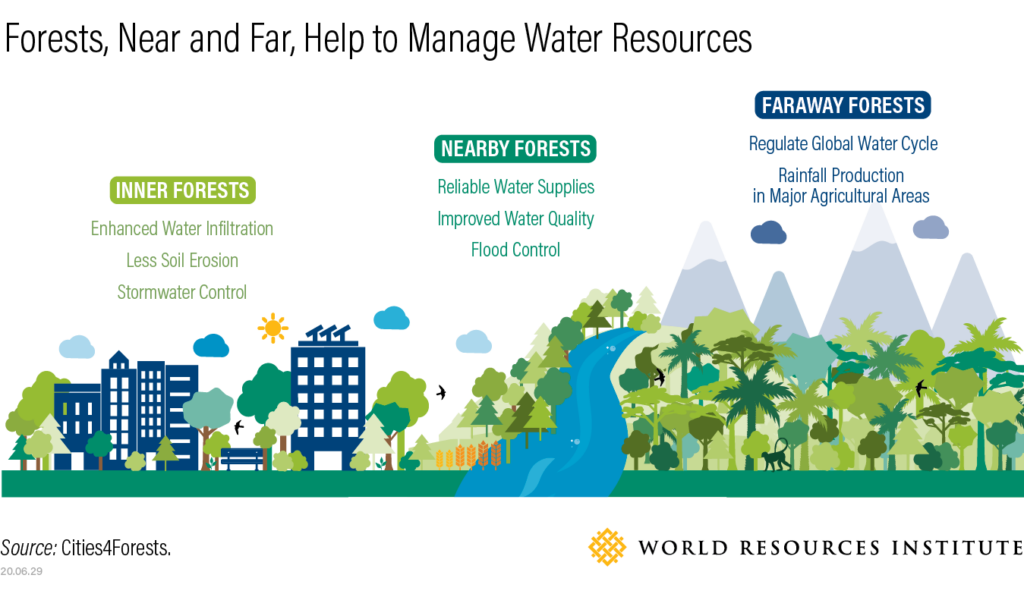 The connection between cities, water and forests works at three levels: inner forests, nearby forests and faraway forests. Here’s how each one protects water in cities, no matter how far away:

Urban water woes are not limited to water scarcity. New research from Aqueduct Floods suggests that flooding has caused over $1 trillion in losses globally since 1980, and cities, often situated near coasts and along rivers, are among the most vulnerable.

As a nature-based solution, urban forests – which include all the trees in an urban area, from street trees to patches of natural and planted forest, as well as the vegetation and soil beneath them – can facilitate improved urban stormwater management and reduce the hazards posed by flooding while simultaneously providing other environmental and cultural co-benefits.

Trees intercept rainfall as water clings to leaves and branches, slowing its journey across the landscape. This reduces the overall volume of surface runoff, curtails soil erosion and increases groundwater recharge. As a result, urban forests mitigate the effects of storms and flooding events on traditional infrastructure like drains and dikes.

This also reduces risks from combined sewage overflows, which threaten the health of communities and aquatic ecosystems. Given the benefits, U.S. cities like Philadelphia and New York City, as well as various “sponge cities” in China, are actively incorporating trees and other green infrastructure to manage stormwater and flooding risks and improve infiltration rates across their cities.

Forested watersheds adjacent to cities affect water quality and availability by regulating precipitation, evaporation and flows. Trees and other vegetation can improve water quality by preventing erosion, breaking down pollutants and providing shade. Forests and their soils also act like sponges that absorb water when it is plentiful and release it when it is scarce. They do this partly by increasing water infiltration into the soil, helping to recharge vital groundwater supplies.

Studies from WRI suggest that protecting these watershed ecosystems can pay off in countries like Brazil. By protecting water quality and preventing sediment from entering waterways, restoring forests around Rio de Janeiro could help the city avoid $79 million in costs for water treatment and reduce use of chemical products by as much as 4 million tons.

However, not all forests provide the same benefits. Converting natural grasslands to forests and the use of non-native trees in plantations may reduce surface water yields for decades. In South Africa, for example, water-intensive Eucalyptus trees have stressed limited water resources. Conserving existing forests and considering local climate constraints may help to avoid negative unintended consequences.

From hundreds of miles away, forests influence precipitation patterns for cities and key agricultural regions. A growing body of research acknowledges the role of tropical forests in creating “flying rivers”: Trees act as giant straws, pulling water from the soil and transpiring it into the air to produce the water vapor needed for rainfall, often in regions far downwind.

The world’s great tropical forests in the Amazon Basin, the Congo Basin and Southeast Asia play an especially important role in regulating rain. However, the ability of these forests to contribute rainfall is in jeopardy.

Research suggests that large-scale deforestation of the Congo Basin would leave parts of Africa, like the populous Nile Basin and the Sahel, hotter and drier. In Latin America, degradation in the Amazon could lead cities in Brazil, Paraguay, Uruguay and Argentina to experience longer dry seasons and reduced agricultural productivity.

With the majority of the planet’s population inhabiting cities, decisions made within urban boundaries affect these tropical forests. The production of commodities like beef, soy and palm oil drove nearly 30% of global tree cover loss in recent decades. Urban areas consume roughly 40 billion tons of materials annually – a number expected to more than double by 2050.

As centers of commerce and culture, cities can stem these losses when municipal governments adopt deforestation-free procurement policies – as governments in Norway and California are exploring – and champion the value of forest conservation. At the same time, corporations can embrace forest-friendly supply chains, using open-source tools like Global Forest Watch Pro.

Many cities, recognizing the connection between forests and water, are acting to support and conserve forests. Members of the Cities4Forests network are working to plan and develop urban green infrastructure, invest in protecting watershed forests and source more forest-friendly commodities. As voters, consumers and ratepayers, city residents have a crucial role to play. Forests protect water for cities, and it is essential that cities step up to protect forests in return.

Visit Cities4Forests to learn more about what cities are doing and how you can get involved.

This blog was originally published on WRI’s Insights.

John-Rob Pool is the Implementation Manager for Cities4Forests within the Natural Infrastructure Initiative at World Resources Institute.

Image: Near or far, forests – like this one at the edge of Hong Kong – affect the movement, quality and availability of water in cities. Photo by Florian Wehde/Unsplash.