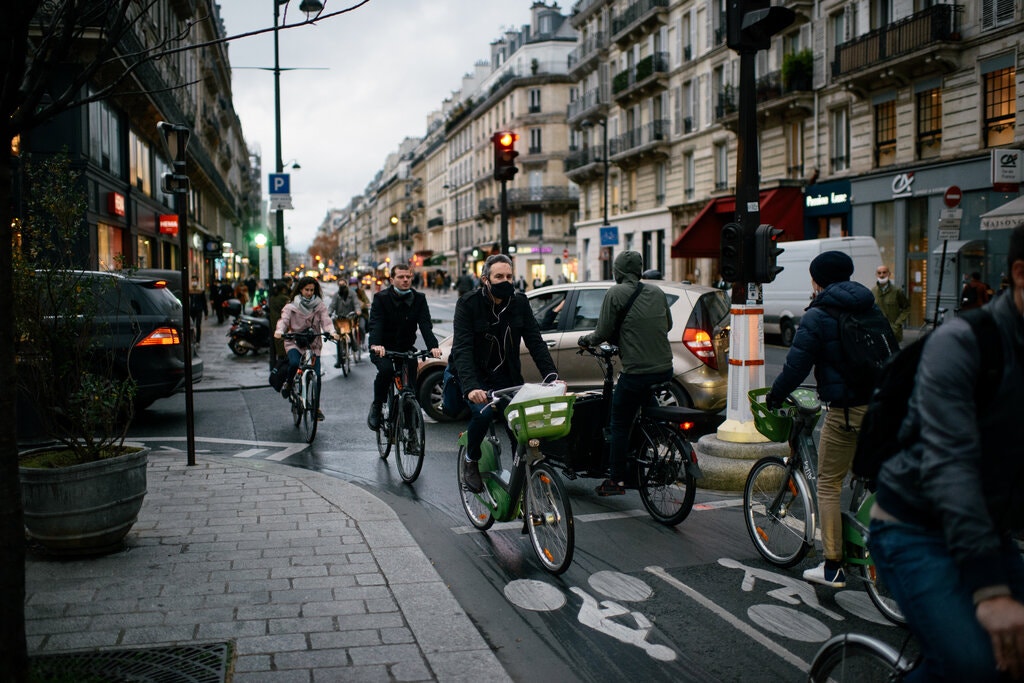 If You Build It, They Will Bike: Pop-Up Lanes Increased Cycling During Pandemic

If You Build It, They Will Bike: Pop-Up Lanes Increased Cycling During Pandemic

A study of European cities adds to a growing body of evidence that investments in cycling infrastructure can encourage bike commuting, which helps cut greenhouse gas emissions.

Adding bike lanes to urban streets can increase the number of cyclists across an entire city, not just on the streets with new bike lanes, according to a new study. The finding adds to a growing body of research indicating that investments in cycling infrastructure can encourage more people to commute by bike, which helps reduce greenhouse gas emissions and improve health.

“It’s the first piece of evidence we have trying to, at a larger scale, link the bikeway infrastructure — these pop-up bike lanes and things that were built — to cycling levels during Covid,” said Ralph Buehler, chairman of urban affairs and planning in the School of Public and International Affairs at Virginia Tech, who was not involved in the study.

The research, published online Monday in the Proceedings of the National Academy of Sciences, found that in cities where bike infrastructure was added, cycling had increased up to 48 percent more than in cities that did not add bike lanes.

“It almost seems like a natural law that the more infrastructure you have, the more cycling you will have,” said Sebastian Kraus, the study’s lead author.

But in public transit research, the effect of adding bike lanes is a matter of debate.

“It’s like a chicken and egg problem,” said Mr. Kraus, a doctoral candidate in economics at the Mercator Research Institute on Global Commons and Climate Change in Berlin. “There can be this reverse causality that, actually, if you have a lot of cyclists, they will demand better infrastructure, and it’s not really the infrastructure that creates more cycling.”

The researchers collected data, including the lengths of new bike lanes and data from bike counters, from 106 cities across Europe. The bike counters allowed the researchers to measure the number of cyclists citywide, not just on the new bike paths. They analyzed the number of cyclists from March through July and found that in cities that had added bike lanes, cycling increased 11 percent to 48 percent more than in cities that had not added bike lanes.

The researchers found that the increase held when controlling for weather and changes in public transit supply and demand.

Bicycles, unlike cars, do not emit greenhouse gases. Matthew Raifman, a doctoral student in environmental health at the Boston University School of Public Health, found in a separate study that investments in infrastructure for cycling and walking more than paid for themselves once the health benefits were taken into account.

“They increase our physical activity and reduce levels of greenhouse gas emissions and improve air quality, which all have impacts on health,” Mr. Raifman said.

Mr. Kraus cautioned that his study’s findings were unique to the pandemic, as public health officials encouraged cycling to reduce the risk of coronavirus transmission and cities across the world added bike infrastructure to their streets. But it may not be a stretch to imagine that more people could keep riding bikes once the pandemic ends.

Research on transit strikes has shown that forcing people to experiment with new routes and modes of transit can lead to new routines.

“There’s indications from mobility behavior research that as soon as you find another way of getting around, then you might actually stick to it,” Mr. Kraus said. “So I’m confident that if you keep the infrastructure, that people will continue cycling.”

Veronica Penney is a reporter covering climate change and a member of the 2020 Times Fellowship class. @veronica_penney