Originally posted on 19 May 2022 on World Bank Blogs

Working with nature to strengthen urban resilience can be cost-effective for addressing climate adaptation and mitigation while bringing out broader benefits for biodiversity, communities, and the local economy. The restoration of the urban wetlands in Colombo, Sri Lanka, is just one example of how improving flood control can go hand in hand with boosting species richness and supporting urban farmers.

Such nature-based solutions (NBS) like urban park development and river restoration are found to lead to an estimated 67% increase in species richness.  Achieving both resilience and biodiversity outcomes requires an integrated approach covering protection (local habitats that are still in good ecological conditions), restoration (of degraded ecosystems), or creation of new interventions if needed (Figure 1). These NBS need to be purposefully planned, designed, monitored, and maintained. Below are some practical steps for maximizing the biodiversity outcomes of an NBS. In designing NBS that will benefit biodiversity and ecosystem services, the first step is to do initial screening to understand the environmental characteristics of the project area. Whether it’s erosion, floods, water quality or urban heat, it is critical to understand the origin and the drivers of the problem, the local environment, the stakeholders involved and the regulatory framework. Strong biodiversity baseline studies and stakeholder engagement are requirements for a proper NBS intervention selection that can benefit biodiversity, and innovations such as the use of environmental DNA (eDNA) are providing new ways of establishing such a baseline.

Biodiversity is a basis for establishing a resilient ecosystem, and diverse ecosystems provide essential ecological services for humans such as food, timber, pollination, and climate mitigation. NBS must be designed to bring back local nature to increase environment benefits, while simultaneously restoring ecosystem services for providing climate functions such as flood control or carbon storage.

Single-species vegetation interventions such as monoculture reforestation result in limited fauna diversity and often store less carbon than diverse landscapes. Similarly, wetland restoration that is not designed taking into account the local drivers of degradation, species preference to salinity, and the interrelations among species risks failing in the attempt.

Using native species instead of introducing exotic species for NBS interventions in urban areas is more likely to boost biodiversity outcomes and offer more ecosystem services to urban dwellers, including air purification, irrigation, shade and production of flowers and fruits for birds.

When designed well, the total biodiversity contribution can be larger than the sum of the individual interventions. An interconnected network of green and blue interventions enhances the generation of ecosystem services and increases species richness. NBS interventions within cities need to be informed by a disaster risk assessment to optimize climate resilience objectives and by a biodiversity assessment to maximize environmental outcomes. Scattered individual NBS interventions in a city can be effectively interlinked by green corridors to allow for ecological connectivity and boost biodiversity.  Especially important in cities, is the recovery of riparian areas, true corridors, and refugia for displaced fauna. 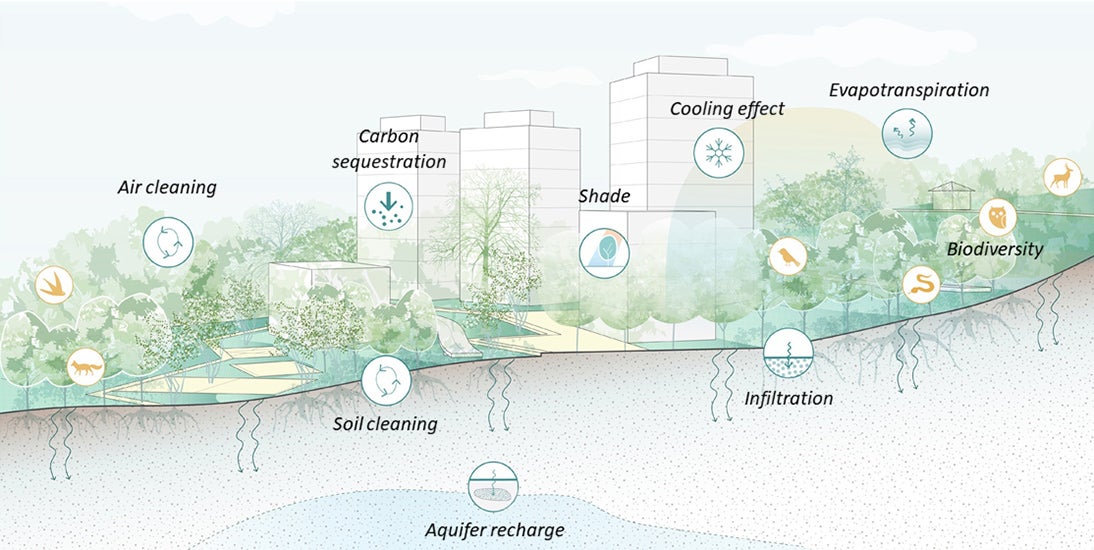 The climate resilience and biodiversity benefits of NBS take time to establish and require continuous monitoring, maintenance, and adaptive management to ensure the continued effectiveness of the NBS. For example, newly planted mangrove trees require over five years to reach their maximum storm wave reduction effectiveness, as the trees grow taller and root systems expand. Investment projects with a limited time duration should therefore ensure that a strong management plan is put in place that continues after project closure and that has sufficient funding (or financial instruments designed) and the government team has the technical capacity to ensure the sustainability of biodiversity gains. Working with communities and using new technology, such as the successful community-driven tree planting campaign in Freetown, can be an effective way to ensure sustainability after project closure.

NBS for climate resilience provide a unique opportunity to address climate change and biodiversity loss in an integrated way. The World Bank’s new Climate Change Action Plan and financing from its fund for the poorest, the International Development Association (IDA), can lead to greater investments by countries to tackle their nationally determined contributions (Paris Agreement) and biodiversity commitments (agreement forthcoming with the adoption of the Post-2020 Global Biodiversity Framework). Acting now and sharing experiences on NBS can provide the inspiration and interest needed to increase resilience of people and nature.

The Global Facility for Disaster Reduction and Recovery (GFDRR) is supporting the scaling up of NBS globally through the Global Program for Nature-based Solutions for Climate Resilience, which is implemented in partnership across the Urban, Resilience and Land (URL), Water, and Environment, Natural Resources and the Blue Economy (ENB) Global Practices.