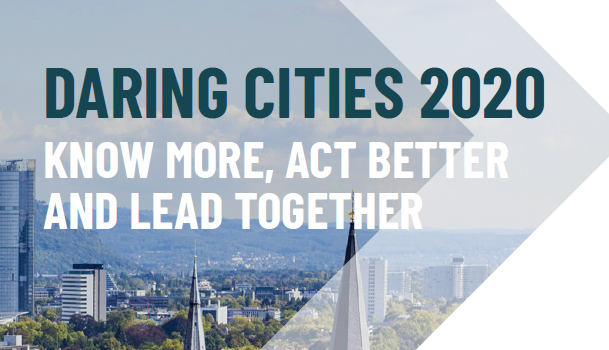 When ICLEI and our partners in the Federal City of Bonn and the German government began formulating a way to build on the 10-year legacy of the Resilient Cities Congress series, we were conceiving an event that could speak to, and serve, the decade before us – humanity’s best chance of preserving a livable future for its inhabitants.

Such an undertaking called for more than just careful branding. The name needed to encapsulate the progress made by cities over the past decade to build climate resilience but, more importantly, the caliber of action happening on the ground to secure a low-emission, resilient future for their residents.

In a typical year, these exchanges would have happened in-person in Bonn. But 2020 proved to be an atypical year with extraordinary disruption. But the need for ambitious sustainability action could not be postponed. In fact, it had to be accelerated.

Without the ability to travel, Daring Cities successfully reimagined how we connect, shifting from in-person to a virtual platform (and from days to weeks of sessions), ultimately providing the year’s most accessible space for dialogue. It was also ICLEI’s most inclusive event yet, with sessions delivered in eight languages that engaged 4,600+ participants in 150+ countries.

Over 850 local and regional governments attended the event, getting access to 98 sessions with speakers such as the United Nations Secretary General and leaders from eight UN agencies, as well as hundreds of city leaders from across the world.

The event also included: A seven-episode podcast series that aired alongside the conference; a collaboration with TEDx and Future Stewards to bring the global Countdown initiative to Daring Cities; the Race-to-Zero Email Boot Camp that gave allowed participants to explore the climate neutrality conversations happening at Daring Cities through case studies, articles and interactive tools; and the Innovate4Cities Day, which identified what knowledge gaps need to be addressed to implement city climate action plans.

The report on our first virtual gathering – Daring Cities 2020 – is now available for download.

The first outcome is that cities and regions are already acting on the climate emergency. Already, 982 cities and regions around the world have committed to one or more forms of ambitious climate action. As a unique example, all local governments in South Korea have declared a climate emergency during 2020, joining Glasgow, Scotland and Recife, Brazil, among many more. Dunedin, New Zealand, and Malmö, Sweden, have pledged divestment from fossil fuels while Tshwane, South Africa, and Orlando, USA transition to 100% renewable energy and Turku, Finland, is on track to achieve climate neutrality by 2029.

The second outcome is that a daring approach drives momentum to respond to the climate emergency. It is built on the foundation of “Know more, act better and lead together” — the framework adopted by Daring Cities as prerequisites for local governments taking the most ambitious climate action.

The framework is seen in the many cities that are striving to not only “build back better” but to go a step further and pursue a true redesign. It is embodied, for example, in the Mannheim Message, the European cities’ local response to the European Union’s Green Deal, which calls for systemic changes to localize the process into Local Green Deals (page 28). And it is exemplified by the Government of Japan, which announced a stepped up climate commitment during Daring Cities to achieve net-zero emissions by 2050, working through a zero-carbon cities platform to deliver a prosperous, resilient post-COVID-19 society.

The third outcome is that local and regional governments need, demand and deserve this convening place for integrated and supported local action. When we took this idea to our network of local governments and to our partners, the answer was resounding: Yes, we want this space to reflect, collaborate and accelerate. Not as a usual climate conference, but as a space to explore ideas and areas that, at a first glance, might seem unconventional in relation to climate action. This means elevating discussions on climate issues to a holistic dialogue that includes cross-cutting themes, including biodiversity and nature-based solutions, waste minimization and the circular economy, sustainable urban mobility and ecologistics, and sustainable public procurement. Bonn, Germany is applying this holistic approach through its Voluntary Local Review of the Sustainable Development Goals.

Across the forum, Daring Cities shined a spotlight on actions local governments are already taking to combat the climate emergency. Each embodies knowing and leading as part of their acting, and many adopt integrated approaches.

The many innovative and ambitious climate actions and policies being implemented around the world are as diverse as the cities, towns and regions responsible for them. In all cases,

These daring actions are more template than blueprint: They show what worked in one place very well but invite communities everywhere to adapt them to a local context and make them their own.