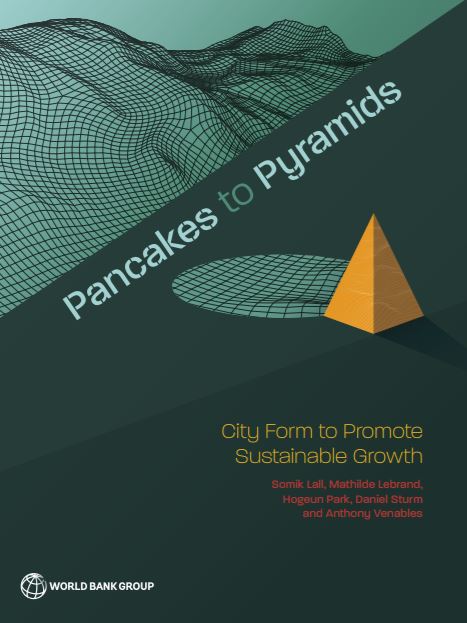 Towns and cities are economic and social microcosms in which large numbers of people and firms interact. These interactions largely shape how a city looks, how it functions, and how it grows. But how exactly does this many-sided relationship work? What are the specific drivers of urban economic and spatial development? Pancakes to Pyramids brings us closer to answering these questions, beginning with an idealized contrast between two patterns of urban spatial growth. Pancakes are cities that grow outward and remain relatively low-built. Pyramids are cities that grow partly outward, but also partly inward and upward, filling vacant parcels and adding height to central districts to increase economic and residential densities. Both types of density can help cities overcome the challenges that come with population growth, and most urgently, evolving from a pancake into a pyramid, creating a platform with more options for controlling greenhouse gas emissions. This report draws on new evidence, econometric analysis, and predictive modeling to relate the economic growth of cities to their past spatial evolution, and to the possibility and conditions for future pyramidal growth.

Some interesting takeaways from the report include:

The growth of urban built-up area worldwide is not as large as conventional wisdom suggests.

Horizontal growth is inevitable for most cities in most developing countries.

Dysfunctional urban land markets, along with zoning and restrictive building regulations, are factors that can work against taller structures, economic density and pyramidal growth.

[1] Forecasts by Jones et al (2021), prepared for the European Commission using the Degree of Urbanization approach, predict that total urban land area will grow 29 percent between 2015 and 2050—in line with the spatial growth rates we measure here for 1990–2015.

Pancakes to Pyramids was funded by the Swiss State Secretariat for Economic Affairs (SECO) through the World Bank Umbrella Multi-Donor Trust Fund Sustainable Urban and Regional Development (SURGE), and the Global Environment Facility (GEF) through the Global Platform for Sustainable Cities (GPSC).