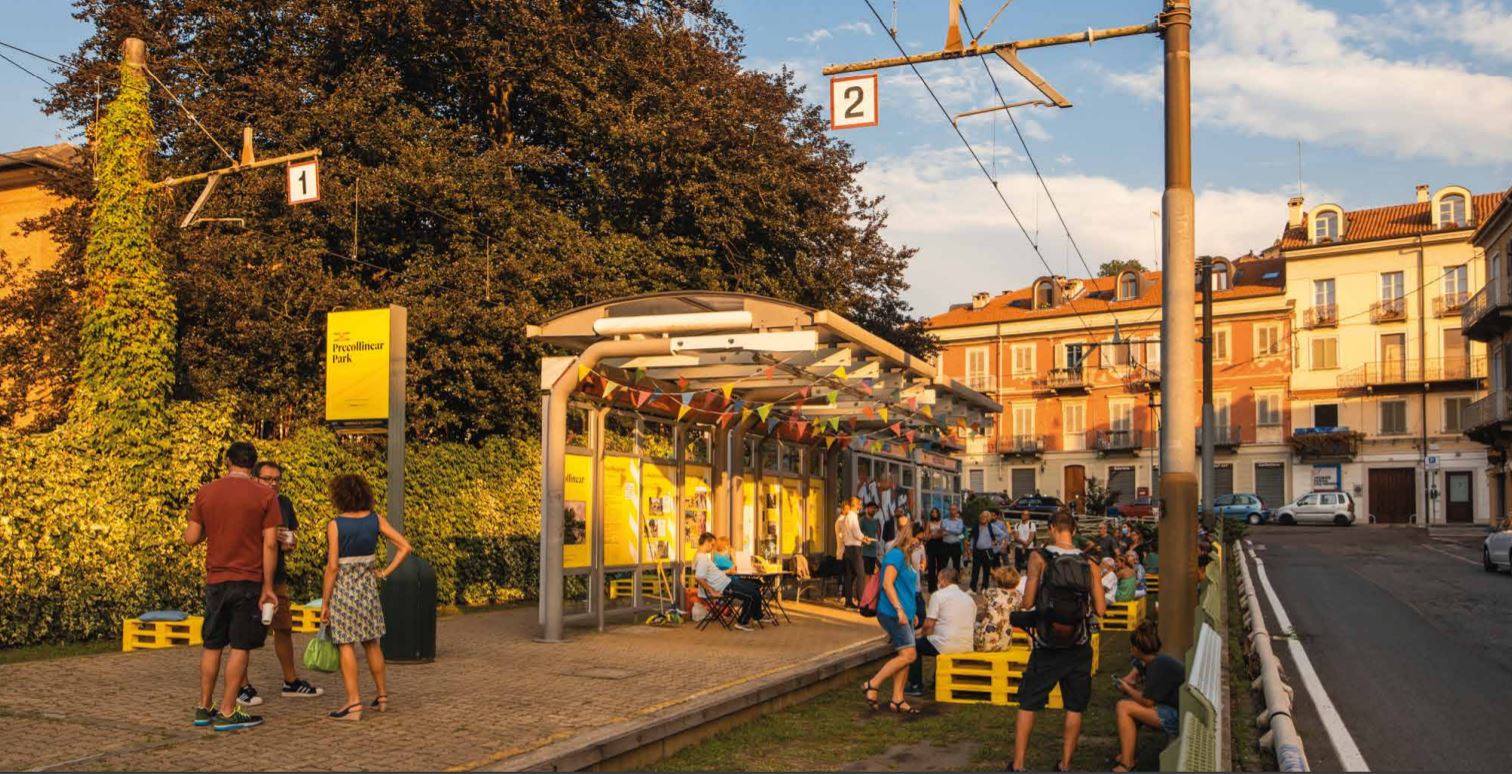 An infrastructure leftover and a Park in the making

When in June 2019, after the first lockdown, the non-profit organisation, Torino Stratosferica’s team was temporarily handed over by the Turin city council the strip of land, where once ran the light metro line, they inaugurated the park thus making it their first concrete placemaking. Since then the team of city believers has not ceased to organise works and events for and at the park, enabling the nearby community to no longer see it as an infrastructure leftover but a free and accessible park.

Precollinear Park stretches for 700-metres, occupying the area between the two carriageways in Corso Gabetti, beginning at the one end at the open spacious bridge, Ponte Regina Margherita, and then slicing uphill through the tree-lined green linear strip to the ex tram terminus on the other end, in Piazza Hermada. It unites four bordering districts, Borgo Po, Madonna del Pilone, Vanchiglia, and Vanchiglietta, and is a High-Line-style walk but with feet firmly on the ground; much like the Turin people themselves.

The only bridge with a park

From Ponte Regina Margherita, one of six bridges over the river Po, visitors can always enjoy the breeze and the spectacular open views of the Alps, the Basilica di Superga, the hills and a striking sunset over the Po. Torino Stratosferica has placed a bright yellow reconditioned shipping container on the far end of the bridge which serves as an info point and a bar during events. The bridge also currently houses, Visioni da Torino Stratosferica, an exhibition displaying 40 images suggesting transformations for Turin’s landmarks proposed by 40 local architecture firms.

The park is a place for continuous transformation since residents and the Turin community at large have started to enjoy and appreciate how this green area is full of potential. Following the placing of street furniture made of pallets, the gardening and cleaning works, and the increasing interest of the nearing community, the future is bright. During the quarantine and its unfathomable government decrees, when people were not allowed in parks, some residents felt safe walking their dog at Precollinear Park, and enjoyed the breeze on the bridge, because technically “this place isn’t a real park”. In the meanwhile, people from all over the district visiting Precollinear Park have begun treating it as their own looking after it, and are happy to co-create.

Precollinear Park is sprucing up for the new year and, along with the routine maintenance of the greenery of the long strip, the Torino Stratosferica team has implemented wayfinding to the new crossings in the proximity of the major roads cutting through Precollinear Park. Recruitment of more volunteers is still underway, adding to the 60-plus-member team that is already helping to keep the park clean and safe. The ongoing crowdfunding is made even easier by a QR code. Torino Stratosferica has other projects in the pipeline for 2021 to improve the park, by making it an even more special place for gatherings and togetherness – Precollinear Park is always open.

Torino Stratosferica is a non-profit organisation with a strong belief that City Imaging is the perfect tool for dynamic and creative people to redesign the city: the engine of cultural and economic progress.