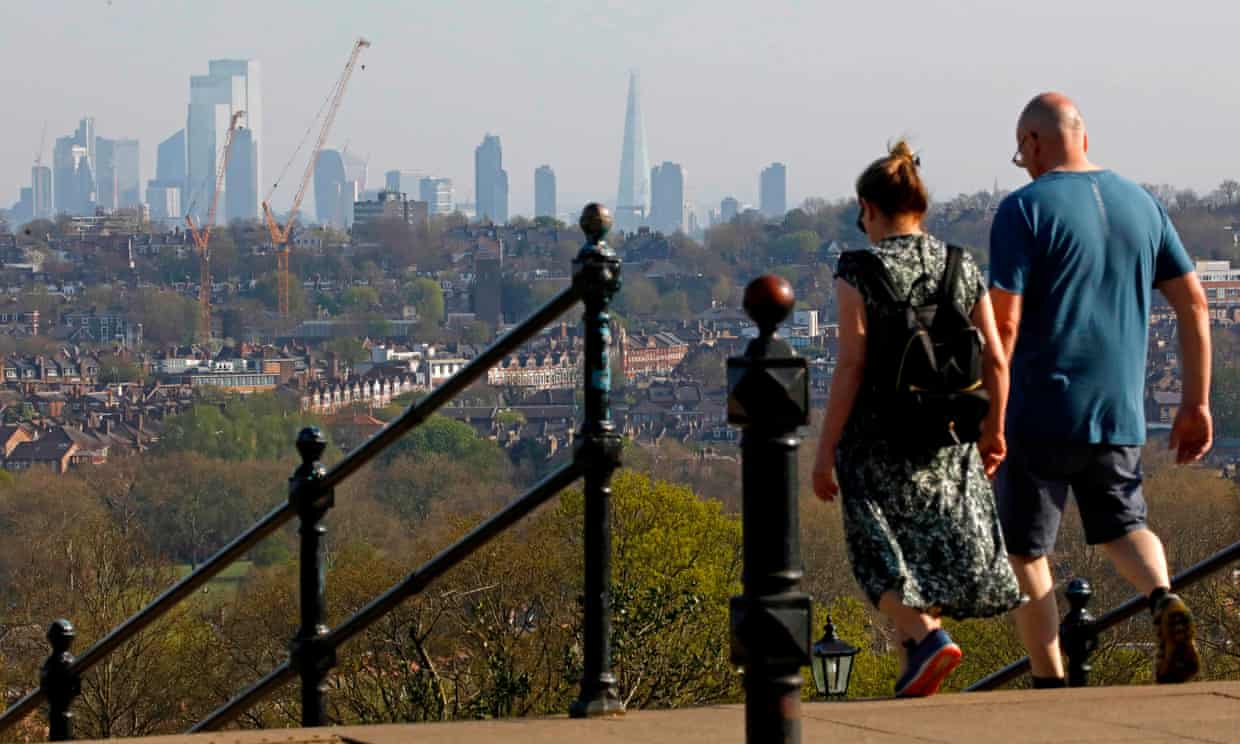 Photograph: Tolga Akmen/AFP via Getty Images - A couple take in the view of London walking in Alexandra Park. The city ranks among the most walkable in the world.

The world’s most walkable cities include London, Paris, Bogotá and Hong Kong, according to a report. The UK capital outranks almost 1,000 cities around the world on citizens’ proximity to car-free spaces, schools and healthcare, and the overall shortness of journeys.

Researchers at the Institute for Transportation and Development Policy (ITDP) said making cities walkable was vital to improve health, cut climate-heating transport emissions and build stronger local communities and economies. However, they said very few cities overall gave pedestrians priority and were dominated by cars. The report found US cities ranked particularly low for walkability due to urban sprawl.

Among cities with more than 5 million inhabitants, only Bogotá in Colombia was in the top five for all three measures. The first measure assessed the proportion of people living within 100m of a car-free place, such as parks, pedestrianised streets and squares. These enhance health, boost community connections and increase pedestrian safety, the researchers said. Hong Kong took the top spot with 85% within 100m, with Moscow, Paris and London completing the top five.

The second measure looked at the proportion of people living within a kilometre of both healthcare and education. In Paris, 85% of people lived within this distance, giving it top spot, followed by Lima in Peru, London, Santiago in Chile and Bogotá.

The average size of city blocks was the third measure, as smaller blocks make it easier for people to walk directly to their destinations without detours around large buildings. Here, Khartoum in Sudan scored highest, followed by Bogotá, Lima, Karachi in Pakistan and Tokyo in Japan.

The report includes evidence that places where walking is easier and safer have lower air pollution, less obesity, more children’s play time, fewer road deaths and better performing local businesses, as well as reduced inequality. It notes that nearly 230,000 pedestrians around the world are expected to be killed in road crashes this year.

“In order to provide safe and inviting walking conditions, it is essential to shift the balance of space in our cities away from cars,” said Heather Thompson, the head of ITDP, which is based in New York. The IDTP said the need was particularly urgent as the coronavirus pandemic was driving people away from walking and public transport and into private cars.

“Our city streets across the planet are already full of cars,” said Taylor Reich, an ITDP researcher. “If you really want to see the worst for walkability, it is the really sprawling cities of the US. They might have great sidewalks, but everything is so far apart that it’s impossible to practically walk to the grocery store or the school.”

Indianapolis was the lowest-ranked US city, with just 4% of people close to education and healthcare and 9% next to a car-free area. Reich said policymakers everywhere needed to plan dense mixes of housing, shops and businesses and equip streets with benches, wide pavements and shade.

Among other cities scoring highly for closeness to car-free spaces are Berlin and Barcelona in Europe, Melbourne and Sydney in Australia, while Washington DC is ranked 25th in the world. For closeness to healthcare and schools, Kathmandu in Nepal and Athens in Greece are both high, while Toronto in Canada is ranked at 35 and New York City at 50.

The report cites examples of developments that have made cities more walkable, such as in Pune, India, where a road redesign prioritised pedestrians and cyclists by building-wide sidewalks and creating areas for children to play and vendors to sell. In Bogotá, there was a concerted effort at the turn of the century to create a city “with more public space for children than for motor vehicles”, by focusing on buses, cycling and walking.

Alexandra Gomes, at the London School of Economic cities centre, praised the report and said: “Walking is crucial for liveable cities and a basic right for any city dweller. However, long-time walkability has been a planning afterthought in many parts of the world. In cities such as London, though it is certainly in need of improvement, the infrastructure exists; however, in other areas of the world walkways do not exist or are almost fully occupied by cars.”

“Millions of people have rediscovered the joys of walking and want to walk safely, but the pandemic has shown that too many of our streets are not fit for purpose,” said Mary Creagh, at UK charity Living Streets. “The ITDP’s new data tools show how to build more walkable cities, to tackle the twin epidemics of obesity and loneliness, and create a cleaner future for pedestrians and our planet.”

“People will use the infrastructure that you give them and because we’ve built cities for cars, everyone wants to drive around,” said Reich. “But if we were to start building cities for people to walk in, people will change their behaviour and will live longer and happier lives.”