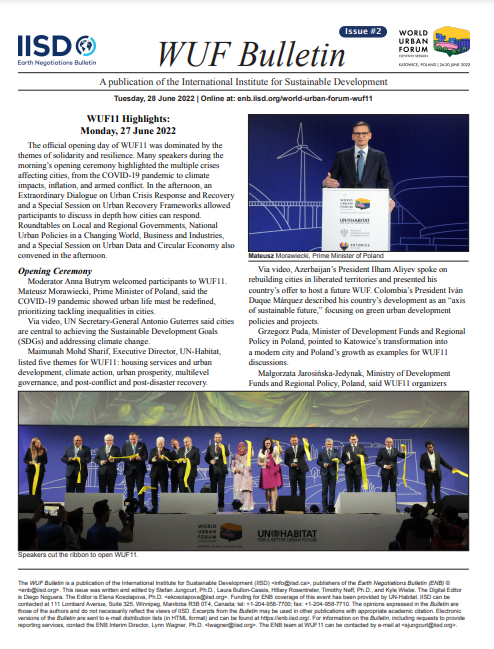 The official opening day of WUF11 was dominated by the themes of solidarity and resilience. Many speakers during the morning’s opening ceremony highlighted the multiple crises affecting cities, from the COVID-19 pandemic to climate impacts, inflation, and armed conflict. In the afternoon, an Extraordinary Dialogue on Urban Crisis Response and Recovery and a Special Session on Urban Recovery Frameworks allowed participants to discuss in depth how cities can respond. Roundtables on Local and Regional Governments, National Urban Policies in a Changing World, Business and Industries, and a Special Session on Urban Data and Circular Economy also convened in the afternoon.

Grzegorz Puda, Minister of Development Funds and Regional Policy in Poland, pointed to Katowice’s transformation into a modern city and Poland’s growth as examples for WUF11 discussions.

Małgorzata Jarosińska-Jedynak, Ministry of Development Funds and Regional Policy, Poland, said WUF11 organizers sought to involve the entire city in preparations, including a Youth Council. Underlining the importance of citizen involvement, Marcin Krupa, Mayor of Katowice, attributed his city’s transformation from “industrial to modern” to the work of thousands of residents.

Elisa Ferreria, Commissioner of Cohesion and Reforms, European Commission, stated that there is never a situation where less cooperation is beneficial, and that social and demographic challenges cannot be solved by being blind to the needs of cities and their surrounding areas.

Berry Vrbanovic, Governing President, United Cities and Local Governments (UCLG), called for both city-to-city and local, regional, and national collaboration to create the enabling environment needed to achieve the SDGs.

Moderator Nigel Fisher, UN-Habitat, invited speakers to reflect on: the nature and scale of urban crises; how recovery can offer opportunities to accelerate necessary transformations; and the role of mayors as first responders and visionaries.

Leilani Farha, Director, The Shift, said the housing crisis is driven by the extraction of wealth from housing. Mary Kaldor, London School of Economics, said as wars are shifting to cities, civilians suffer the highest casualties and must thus be better protected. Clarissa Augustinus, UN-Habitat, urged agile, fit-for-purpose systems to enhance biodiversity and address housing and other equity issues.

Bogotá’s Mayor Claudia López Hernández recounted seven “waves” of crises in her city, from the pandemic to unemployment and social strife, and the democratic changes and sustainable policies that have built opportunities. Responding to a question about financial challenges, she discussed her initiative of freezing taxes for households while increasing taxes for industries profiting from crises.

Mohd Sharif called for youth and local governments to be given the means to lead on urban crises and warned we are returning to a world of “me, myself, and those I know” at a time when solidarity is needed. Sameh Wahba, World Bank, stated that investing in urban resilience is no longer a luxury, but a necessity. Raouf Mazou, UNHCR, stated that cities are absorbing most displaced peoples globally, facing difficulties in the process.

Gilles Carbonnier, International Committee of the Red Cross (ICRC), spoke to the challenges of areas in urban warfare, namely ensuring the protection of citizens, critical infrastructure, and access to essential services.

Emmanuel Jal, independent artist and former child soldier, explained how he used imagination to survive and overcome trauma. He said access to books and education is essential to enable traumatized children to imagine a better future.

On solutions, Carbonnier outlined how health and education services were maintained in Brazilian cities through training service providers. Mazou said supporting refugees in cities rather than urban camps enables better services and integration. Wahba emphasized livelihoods and places as “two critically important dimensions that need to go hand in hand” in crisis recovery.

Emilia Sáiz, Secretary-General of United Cities and Local Governments, closed the roundtable, emphasizing that the LGR constituency is an “ally for multilateralism” and that “a culture of peace is the basis for development.” She prioritized: a “universal agenda” linking issues; decentralization and sharing power; strengthening communities and ensuring they receive necessary services; and human rights as the basis for caring cities.

The session concluded with Poland’s Minister of Economic Development and Technology, Waldemar Buda, stressing the need to break through silos and foster cross-sectoral collaboration on urban development.

Business and Industries: This roundtable focused on how to increase private sector engagement in sustainable city development and how the private sector can help address financial bottlenecks. Participants were presented with two success stories: the Regent Park revitalization project in Toronto, Canada; and the Lagos Inland Waterways Program in Nigeria. A panel of experts then discussed ideas to overcome challenges in private sector participation, including:

One panelist noted that investment in municipal projects is often hindered by miscommunication about risk, with others agreeing that greater transparency is needed to allow investors to make informed decisions on whether a project is “investable,” and which types of capital are needed.

Filiep Decorte, UN-Habitat, said urban recovery frameworks (URFs) offer integrated approaches to recovery but are difficult to implement when national and bottom-up frameworks are disconnected. Ryan Knox, UN-Habitat, gave a presentation on URFs piloted in Syrian cities. These were developed with local partners and sought to strengthen institutional arrangements.

In a first panel on governance and urban displacement, Martha Gutierrez, GIZ, said citizen consultations were essential when cities are confronted with an influx of internally displaced peoples. Lars Gronvald, European Commission, said the urban level is where multiple partners articulate a common strategy. Manuel de Araújo, Mayor of Quelimane, said there is a case for the management of crisis response to be allocated to local governments. Fatma Şahin, Mayor of Gaziantep, emphasized social justice as a key element of crisis recovery.

In a second panel on cultural heritage and financing, Yevhen Plashchenko, Ministry of Development of Communities and Territories of Ukraine, highlighted that the needs of Ukrainian refugees must be addressed in host countries now and Ukraine later when the country will prepare for their return. Ieva Kalnina, Swedish Association for Local Municipalities and Regions, noted it was preferable for humanitarian actors to work with local governments rather than NGOs. Wahba, World Bank, said both people-centered and infrastructural interventions are needed in crisis recovery.