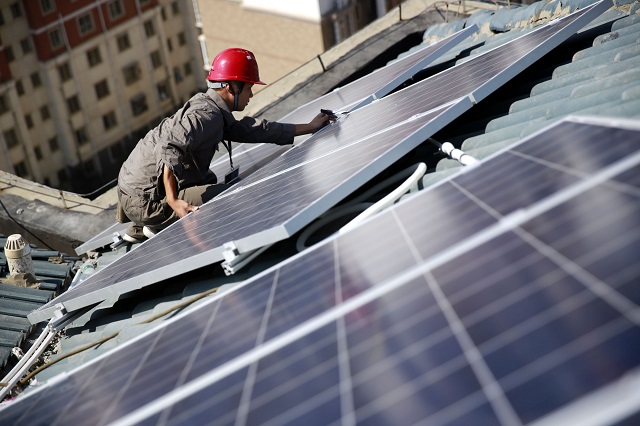 World leaders are gathering in New York this week and next for the UN General Assembly meeting (UNGA76) and Climate Week. The two major events come at a critical moment for climate action.

The world is facing an emergency. Nearly every person on the planet felt the impacts of climate change this summer — from devastating flooding in China, Uganda, Nigeria, the United States and Western Europe; to extreme heatwaves and droughts across Africa and the Americas; to record wildfires in the United States, Canada, Russia and the Artic; and heavy monsoon rains in India and the Philippines. The toll on people’s lives and livelihoods keeps growing.

Meanwhile, the newest report from the Intergovernmental Panel on Climate Change (IPCC), the world’s most authoritative scientific body on climate change, shows that these impacts are just the beginning. They will seem mild compared to what we will face if we do not act. The report finds that the world still has a narrow path to limit average global warming to 1.5 degrees C (2.7 degrees F) — the limit scientists say is necessary for avoiding the worst effects of climate change — but it will require rapid, transformational change this decade.

Governments and businesses — especially the world’s major emitters — must urgently step up their commitments to meet this challenge, and then rapidly move from commitments to action. Coming just six weeks before UN climate negotiations in Glasgow (COP26), where countries need to make major progress on climate action, UNGA and Climate Week are important opportunities for leaders to show their ambition on climate change.

Here are five critical areas we are watching for signs of progress:

UNGA presents a prime opportunity for major emitters to step up with more ambitious plans to reduce their emissions by 2030. This year, all countries are expected to submit updated national climate plans, known as Nationally Determined Contributions (NDCs), under the Paris Agreement. So far, 116 countries representing roughly half of global emissions have submitted updated plans. Yet only about half of these (67 countries), reflect higher ambition than their original plans submitted in 2015, and altogether these efforts are not nearly enough to limit global temperature increase to 1.5 degrees C.

Major emitters that have not yet announced new and more ambitious targets need to come forward by COP26 with serious offers to curb their emissions by 2030. At the G20 ministerial meeting in July, the G20 countries committed to submit new or updated NDCs by COP26. UNGA is a prime opportunity to come forward with those targets. A new paper by WRI and Climate Analytics finds that if all G20 countries set ambitious 2030 emissions-reduction targets and commit to reach net-zero emissions by mid-century, global temperature rise could be limited to 1.7 degrees C, keeping the 1.5 degrees C goal within reach.

The spotlight shines especially bright on China, the world’s largest emitter, which has not yet announced a stronger emissions-reduction target for 2030. In order to get on track for its carbon neutrality pledge by 2060, it’s imperative that China announces a more stringent NDC and stops international finance for coal, as South Korea and Japan (the other two major financiers of international coal) recently committed to do.

Other major emitters that need to step up include India, Turkey and Saudi Arabia, which have yet to submit their updated NDCs, and Australia, Brazil, Mexico, Russia and Indonesia, which made no headway or backslid with the updated 2030 targets they submitted.

Vulnerable nations — many of which have submitted strong climate plans — are urging major emitters to take concrete, near-term action on climate change. Ensuring that major emitters raise their ambition by COP26 is one of the top priorities of the Allied for Climate Transformations 2025 (ACT2025) consortium, a group of organizations from vulnerable nations that are informing and influencing the COP26 negotiations. ACT2025 will soon release an Alliance Statement further crystalizing what must be delivered for COP26 to be both ambitious and just.

Indeed, the $100 billion annually is only a fraction of what vulnerable countries really need to decarbonize and build resilience to climate impacts, so it should be seen as a floor for climate finance. Developed countries should commit to deliver a minimum of $500 billion total over the 2020-2024 period, and should establish a more ambitious target to be agreed prior to 2025, to support developing countries.

The United States, especially, has not been contributing its fair share toward the global climate finance goal. Other rich countries lagging on contributions will also need to step up, including Italy, Canada, Australia, Spain and others. Will they do so during Climate Week?

Developed countries should also announce new pledges on finance for climate adaptation, especially for the Adaptation Fund, to ensure a balance of funding between mitigation and adaptation. Adaptation accounts for just 21% of overall climate finance. And developed countries need to improve access to climate finance and ensure it reaches the local level, which is a top priority for developing countries.

We will also watch for announcements on moratoriums for international financing for fossil fuels, including coal financing. At the G7 summit in Carbis Bay, its members reaffirmed their commitment to end unabated international coal finance by the end of 2021 and confirmed earlier pledges to phase out fossil fuel subsidies by 2025.

Alongside this year’s General Assembly, the UN will host the world’s first-ever Food Systems Summit to address inequities and inefficiencies in the food system and identify food-related solutions to fight climate change and achieve other development goals.

Countries and others should come forward with investments to produce food more sustainably; protect remaining ecosystems from agricultural expansion; reduce demand for land-intensive agriculture, such as by cutting food loss and waste; and restore degraded landscapes into productivity. By meeting these goals simultaneously, we can feed a growing world population while mitigating climate change, ensuring farmers and herders can adapt to the impacts of climate change, and lifting millions out of poverty.

In addition to action from national governments, we’ll need increased ambition from non-state actors, too, such as cities, businesses and more.

At Climate Week, a group of mayors will issue a call to action urging national and subregional governments, companies and financial institutions to urgently ramp up policies and investments to support forest conservation, restoration and sustainable forest management. They are issuing their declaration through the Cities4Forests initiative, a coalition of 73 major cities committed to greater forest action. Evidence shows that city residents depend deeply on forests — even those that are far away — for clean air and water, reducing heat islands and flooding, and sequestering carbon.

Businesses should also be stepping up in this moment between UNGA and COP. There is big momentum: Nearly 2,000 businesses have committed or set science-based targets to reduce their emissions. And over 250 asset owners, asset managers and banks — together responsible for assets over $80 trillion — have committed to transition their portfolios to net zero emissions by 2050 at the latest, under the Glasgow Financial Alliance for Net Zero. They have agreed to use science-based guidelines to reach net zero emissions, cover all emission scopes, include 2030 interim targets and commit to transparent reporting and accounting.

Businesses should also use their influence to push national governments to take more ambitious climate action. Most immediately, U.S. businesses should publicly support the reconciliation package being considered by the U.S. Congress, which presents one of the best opportunities to meet U.S. climate goals — the CEOs of 12 environment and sustainability groups recently called on businesses to do just that.

We are also expecting the United States and Europe to announce a major new global pledge to reduce methane emissions by nearly a third by 2030. Other countries will be invited to sign onto the pledge. Methane is a potent greenhouse gas, with a warming potential 87 times that of carbon dioxide over 20 years. Reducing methane emissions is vital to addressing climate change.

The Urgency of Action During Climate Week and UNGA76

We stand at a pivotal moment. The climate impacts we are seeing today will seem mild compared to future years if we do not act. We need to make rapid, radical shifts in the ways we use and make energy, produce food, manage land, and move people and goods around. The good news is that doing so will create a healthier, safer, more prosperous world. It will create much-needed jobs and economic benefits — and prevent a calamitous future.

As COP26 quickly approaches, now is the time for governments, businesses and other stakeholders to act with the ambition this moment calls for. World leaders should use the global stage at UNGA76 and Climate Week to show their citizens and peers that they recognize the urgency of the crisis. Their actions will determine our collective fate.

Cover Photo by humphery/Shutterstock: A utility worker installs rooftop solar panels in Jiujiang, East China. Climate Week 2021 is a prime opportunity for major emitters to step up their climate commitments.

This article was originally published on WRI’s Insights.