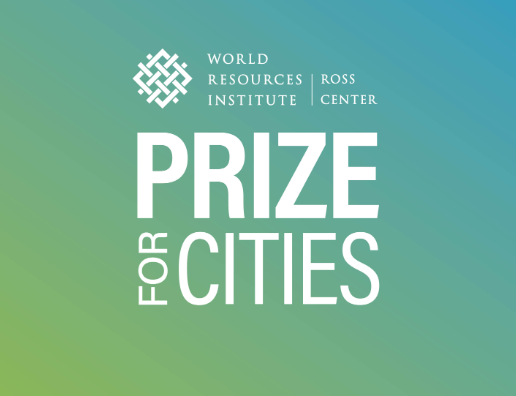 This cycle’s theme, “Thriving Together in Turbulent Times,” invited submissions demonstrating how cities are responding to uncertainty, disruption and crisis. With 260 applications from 155 cities in 65 countries, the applicant pool demonstrates enormous drive, commitment and creativity in responding to an increasingly tumultuous world.

Through the Prize, WRI seeks to inspire urban changemakers across the globe by elevating trailblazing initiatives, telling impactful stories of sustainable urban transformation, and creating a network of changemakers.

“The Prize is something very special because it offers a barometer of the challenges cities are facing and then unearths the most impactful and innovative responses,” said Ani Dasgupta, President and CEO at WRI. “It recognizes the very best ideas, working at scale, and celebrates the people and places driving change. By holding up exemplary leadership, it encourages the global urban community to strive for excellence in their own cities.”

“For the 2021-2021 cycle we challenged people to show it’s possible to create outsized positive change even during times of unprecedented uncertainty and disruption,” said Anne Maassen, Global Lead for the Prize. “The finalists address a range of challenges – natural disasters, climate and public health emergencies, gridlocked mobility systems and a housing crisis. They’ve lifted up a kaleidoscope of beneficiaries, including the urban poor, women, children, transgender people, migrants, and informal workers, and helped their cities become more resilient, inclusive and better prepared to withstand future shocks.”

The five finalists are:

These exceptional finalists were chosen through a rigorous selection process. Criteria included the extent to which submissions demonstrated big, innovative ideas and novel approaches; life-changing impact on people’s lives, mindsets and behaviors; and ripple effects across and beyond the city. Finalists are chosen by a large evaluation team, and the $250,000-grand prize winner is selected by an independent jury of leaders in urban affairs. The four runners-up each receive $25,000. The grand prize winner will be announced in December 2022.

Previous grand prize winners have demonstrated the vision, coalition-building and perseverance that are key to sustaining change and amplifying lessons learned. The 2020-2021 grand prize was awarded to Sustainable Food Production for a Resilient Rosario, a far-reaching urban agriculture program from the municipality of Rosario, Argentina. In 2019, the inaugural grand prize was awarded to SARSAI, a program of the non-profit Amend, for its highly impactful and replicable approach to creating safer journeys to school for children in Dar es Salaam and other African cities.

WRI is a global research organization that spans more than 60 countries, with international offices in Brazil, China, India, Indonesia, Mexico and the United States, regional offices in Ethiopia (for Africa) and the Netherlands (for Europe), and program offices in the Democratic Republic of Congo, Turkey and the United Kingdom. Our more than 1,000 experts and staff turn big ideas into action at the nexus of environment, economic opportunity and human well-being. More information at www.wri.org.

WRI Ross Center for Sustainable Cities is the World Resources Institute’s program dedicated to shaping a future where cities work better for everyone. It enables more connected, compact and coordinated cities. The Center expands the transport and urban development expertise of the EMBARQ network to catalyze innovative solutions in other sectors, including air quality, water, buildings, land use and energy. It combines the research excellence of WRI with two decades of on-the-ground impact through a network of more than 350 experts working from Brazil, China, Ethiopia, India, Mexico, Turkey and the United States to make cities around the world better places to live. More information at www.wrirosscities.org.