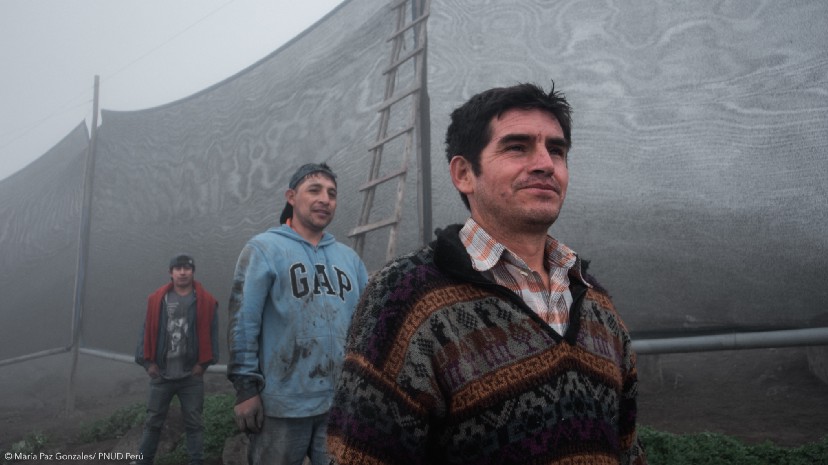 Defenders of the fog oases, the last green belt in Peru’s capital, have organized to use fog as a solution to water shortages and the climate crisis

Few megacities were settled in a desert. Lima is one of them. Unlike the rest of Peru, here water is a naturally scarce resource that depends on glaciers that climate change has already melted by 51% in this country, according to the National Water Authority. Without rain, but with a lot of fog, in this South American capital the communities that defend the hills have found in this thick mist an alternative to water scarcity that could mark a before and after in Peru’s commitment to the climate fight.

“Here in the fog oases there is no water, but they are very humid and there is a lot of fog. Our pilot project turns fog into water”, explains Noé Neira, president of the Lomas Paraíso Association, which protects this unique and seasonal ecosystem that only emerges in winter when the arid hills of Lima turn green. “Before the fog catchers, each of the neighbors gathered a bucket of water and went up on Sundays to water the plants,” he says.

According to the Coastal Fog Oases Map in Lima, between 2005 and 2017 450.73 out of 19 435.81 hectares of this fragile ecosystem have been lost to land invasion and trafficking. And, despite the neighboring communities trying to reforest them, they lack sufficient water. “We only have water from two o’clock to six in the afternoon. That forces us to store it in drums and tanks and expose our health,” says Ana María Sotomayor, a neighbor and defender of the Lomas de Primavera.

In effect, around 700,000 people from the capital’s poorest districts — many surrounded by fog oases — do not have access to a water service network, according to the National Superintendency of Sanitation Services (SUNASS).

Being the third most vulnerable country to the climate crisis, on top of the continued loss of glaciers, puts water availability at risk, especially in the capital where access to water is already quite unequal. “The concentration of our economic activity and our population in the arid strip of the territory make water management extremely important to address in the country’s adaptation agenda,” says Gabriel Quijandría, Minister of Environment of that country. Hence, the staunch governmental response to this climate emergency through its Nationally Determined Contributions (NDC, for its acronym in English) where water is one of the priorities for adaptation to climate change.

For more than 20 months, a joint effort by multiple sectors and actors of the Peruvian government developed a roadmap to implement these NDCs and, through this, fulfill the country’s commitment to the Paris Agreement to adapt to climate impacts. Based on a participatory process with multiple actors and government sectors, the United Nations Development Programme’s NDC Support Program — financed by Spain, Germany and the European Union — helped to generate the NDC water roadmap. The result is a total of 30 measures framed in three uses of water: population, agricultural and energy; as well as in the multisectoral management of this resource.

From planning to action

“Water plays an important role. If we lose the fog oases, then we would also lose the condensation of the mist and we would be at the mercy of the consequences of climate change”, warns Ascensio Vásquez, president of the Lomas de Primavera Ecological Association.

This climate planning and its results have laid the foundations for pilots like the one that is being developed from the communities that protect the fog oases. With the support of the NDC Support Program and the “Conservation, management and rehabilitation of the fragile fog oases ecosystems” initiative, also known EBA Lomas, to demonstrate the approach of the roadmap of water.

“We have installed a fog catcher in the upper part 800 meters up high in the fog oases,” says Vásquez. “From there the networks come and the water reaches the reservoirs that are in the upper part and then we go down until we reach the plants that we have planted in the greenhouses.” With the right conditions, each fog catcher can capture up to 60 liters of water per day per square meter. This liquid, only suitable for agricultural use, is distributed drop by drop, in an automated irrigation system, to the greenhouses filled with tara trees (Caesalpinia spinosa), a native species used for medicinal purposes since pre-Incan times, that has practically disappeared from the fog oases.

According to estimates by EbA Lomas, these nurseries have the capacity to produce 10,000 tara trees in five months.

This production, in addition to serving to reforest the hills, can be sold and used to promote ecotourism for the benefit of these communities that protect this green belt that borders the capital. This integrates the fog oases into the climate change adaptation strategy, and as minister Quijandría puts it, “incorporates urban planning and creates opportunities to generate wellbeing and income for the local population”.

Although 13,500 hectares of the fog oases are already protected as a Regional Conservation Area by the Municipality of Lima, the success of pilots like this one also lies in the empowerment of the communities and their inclusion in decision-making to conserve this ecosystem. “They already know that they cannot touch the fog oases today, it is forbidden and they cannot invade that part. I feel a bit liberated by that,” says Sotomayor, who for defending these spaces, along with Vásquez, has received death threats from land trafficker mafias.

Therefore, in addition to empowering these environmental defenders, this pilot project is working with local governments where the hills are to better understand the value of these areas for the availability of water, lining their priorities with the NDCs. Likewise, a climate monitoring station is being implemented to alert authorities of illegal activities in the territory that could put the fog oases and, therefore, the availability of water at risk.

To be able to face these risks, the pilot project works alongside district municipalities where the fog oases are located to increase conscience about the importance of protecting these ecosystems. Complemented by a climate monitoring station which is being implemented to alert authorities of illegal activities in the territory that could put the fog oases and, therefore, the availability of water at risk. This station is being linked with the climate monitoring station developed by EbA Lomas, the only one of its kind that predicts episodes of high fog.

“Fog catchers are very economical instruments, because they avoid the use of drinking water for irrigation and also make it easy to obtain water from the peaks and store it,” explains Neira. This is why the pilot is seeing how feasible it is to create rights to exploit the use of mist, placing special emphasis on the fact that it would be rights over an area and not a catchment point. This analysis has been shared with the National Water Authority, which will evaluate considering modifications to its administrative process to include rules for the use of mist water.

The water of the future

Bringing water to almost nine million inhabitants is the challenge of Lima, a constantly growing capital that is among the 20 cities with the highest risk of water stress in the world. As climate change gets more severe, experiences like this one open new opportunities for adaptation, facing a scenario where half the population could be left without water.

This experience undertaken by the communities of the fog oases — which themselves do not have regular drinking water — is an example of how the solutions to the climate crisis and other development challenges lie in nature.

“Water is life. If there is no water, there is no humanity, there are no plants, there is nothing. It would be a desert,” says Neira. More than just a community-based approach, this solution is aligned with the Nationally Determined Contributions, and if it continues to be beneficial it could be replicated in other arid and vulnerable areas, thus being part of the country’s climate struggle for a future where nature is at the center of our decisions.