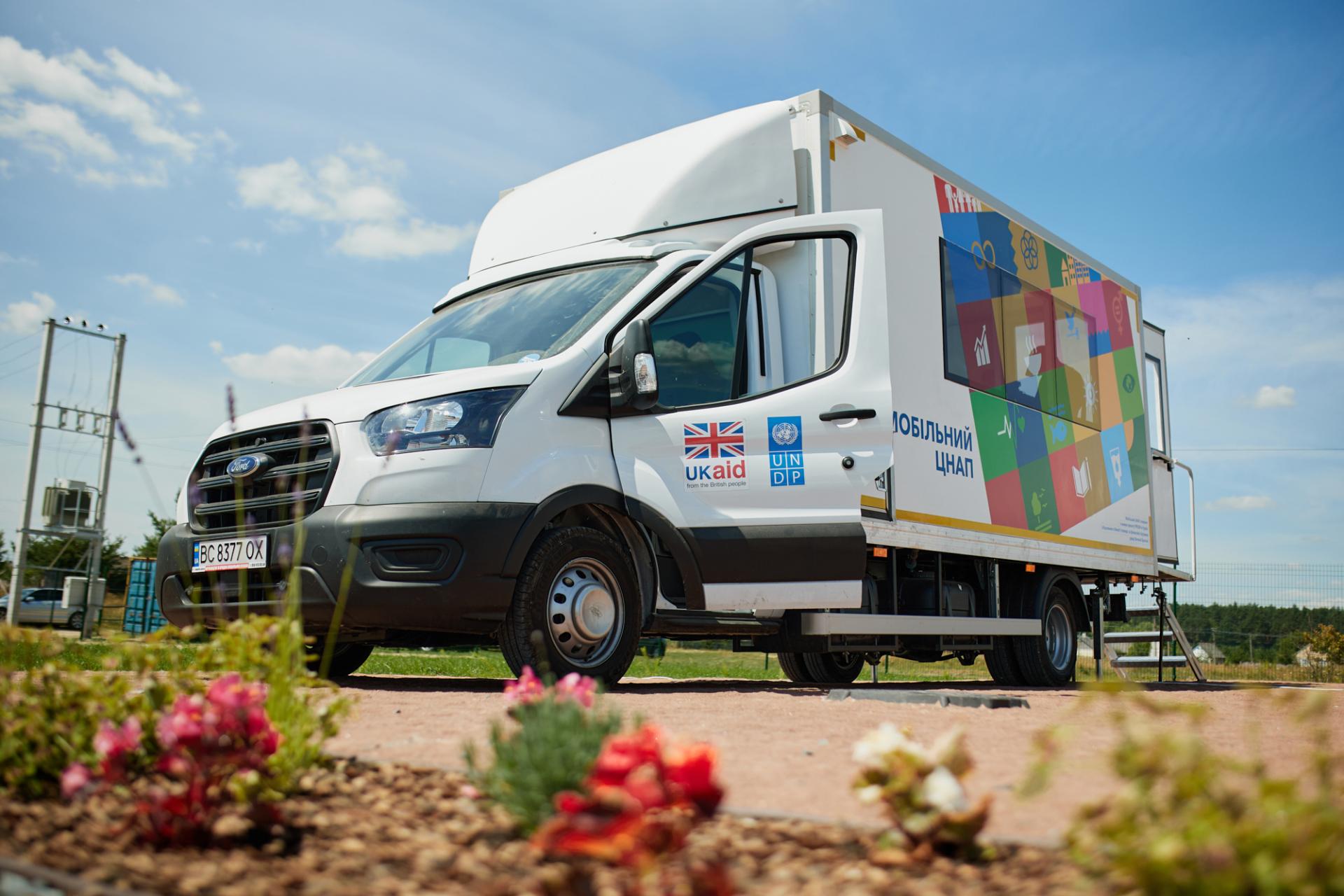 Mobile administrative service centres near home: How communities of Lviv Oblast are working together to provide public services during the war

Ukrainian men and women face numerous challenges every day because of the war. Some of them are issuing necessary documents, and certificates and obtaining basic administrative and social services. We will tell you how this problem is solved in the Lviv Oblast, where four communities have united and launched a mobile administrative services center.

There are 73 territorial communities in Lviv Oblast, which have 55 administrative services centers (ASCs). Since such centers do not exist in every community, the ability to provide administrative services to people with disabilities and residents of the most remote settlements was limited until recently. Many older people were not always able to get to ASC in order, for example, to submit documents for receiving benefits.

In addition, since the beginning of the full-scale war in Ukraine, Lviv Oblast has sheltered about 400,000 internally displaced persons (IDPs), who also need to extend expired passports, to renew their certificates or change the place of receiving social welfare payments.

So, the first thing communities and regional authorities decided to launch quickly was a mobile ASC – a special vehicle equipped with necessary computer and office equipment, software and free access to the Internet. In other words, ASC is a mobile remote workplace for an administrator who can go to the houses of those citizens who do not have the opportunity to visit a stationary ASC to receive public services.

In order to implement this initiative, four communities – Novoyavorivska, Yavorivska, Sudovovyshnyanska and Ivano-Frankivska – signed an agreement on inter-municipal cooperation. This model of partnership is often practiced in the EU countries, where it is one of the most affordable and efficient ways to overcome difficulties in providing quality public services that arise due to the large fragmentation of communities. In addition, the implementation of joint projects has economic feasibility.

Currently, the first and so far the only mobile ASC in Lviv Oblast is based in the Novoyavorivska community, but it also helps to provide administrative and social services to residents of neighbouring communities. They also need accessible and comfortable services for a trip to the regional center without additional time or expenses. The car is equipped with an air conditioner, a convector, a diesel generator, places for visitors, and a lifting platform for persons with disability.

“One of the tasks of administrative reform in Ukraine is that services should be as close as possible to people,” says Volodymyr Matseliukh, head of the Novoyavorivska Territorial Community. “In the first year of work, we set ourselves the goal of creating a modern ASC in the ‘Diia.Center’ format. In order to go further and expand access to services, we took advantage of the support of international partners and launched a mobile ASC, not only for our community, but also for three neighbouring ones, signing a memorandum of cooperation. Such mobile ASC will allow us to deliver, in the literal sense of the word, services to every settlement of the three communities, which is about 200 villages with more than 180,000 people.”

The initiative was launched a few months ago in Lviv Oblast as a part of the Strengthening Community Resilience project, implemented by the United Nations Development Programme (UNDP) in Ukraine and financed by the UK Government, which already has experience. At the beginning of 2021 within the framework of this project a mobile ASC was launched in the Kherson Oblast, where it has proven itself well.

In addition, in recent years, the United Nations Recovery and Peacebuilding Programme (UN RPP) has been working to improve the timeliness and quality of administrative and legal assistance for women and men in Donetsk and Luhansk oblasts, the most war-affected areas along the contact line. Therefore, 16 mobile ASCs were financed by the European Union and transferred to Kreminna, Bilovodska, Lymanska, Ocheretynska, Toretska and Troitska communities.

Another network of fully equipped mobile ASCs, financed by the Government of Canada and transferred under the framework of the Programme, covered remote areas of Novoaydarska, Hirska, Popasnianska, Stanychno-Luhanska and Sievierodonetska communities in the Luhansk Oblast, as well as Mariupolska, Kurakhivska, Siverska, Maryinska and Vuhledarska communities in the Donetsk Oblast.

From Novoyavorivsk to the most distant locations

Three months after the start of the mobile ASC operation, its services have already covered 11percent of Lviv Oblast and most remote settlements.

“More than 180,000 people living within the territory of these four communities and more than 12,000 registered internally displaced persons gained access to services with its help. Among them are members of military servicemen's families,” says Halyna Tupis, head of the Department for the development of administrative services for Digital development of Lviv Oblast Civil-Military Administration.

Novoyavorivsk, Dobrostany, Pidluby, Berdykhiv, Lozyno, Ternovitsa, Starychi, Zaricha… The mobile ASC will run through the settlements of the communities according to the route and schedule drawn up and agreed upon among themselves by the stationary ASCs. In order to request service, the residents should call administrative service centers or contact the head of the community. After confirmation, the car goes down the road. The average distance from Novoyavorivsk to remote settlements is approximately 17 km.

The most needed services

Today, among the most used services of the mobile ASC in Lviv Oblast are primary documents applications for receiving financial and social assistance, subsidies, registration and deregistration status for a person’s and place of residence, issuing extracts from the territorial community register, documentation of displaced persons, registration of property rights and real estate. Administrators can also give information on the conclusion of contracts with public utility companies for water, gas and electricity supply.

“Services should go to people, not people for services,” comments Oleksandr Kulepin, deputy head of Lviv Oblast Civil-Military Administration. He says that this project is a good example of cooperation, when communities initiate changes and join forces for the sake of people and when one community contributes to the development of another. And this, according to him, is absolutely justified both from the consumer's point of view and the optimal use of taxpayers' funds.

In the meantime, another service – an electronic queue management system – is implemented in the ASCs of the other four communities of Lviv Oblast, such as Buska, Zolochivska, Pustomytivska and Dobromylska.

“Electronic queue is a system that, on the one hand, solves the tasks of managing queues and distributing workloads on the staff of public centers, and on the other hand, improves service for their visitors and increases the quality of service. Visitors don't argue with each other and don't distract the staff of ASCs with questions, and administrators work more productively,” explains Halyna Tupis.

Further, plans include the development of a network of modern and accessible administrative service centers in communities. Currently, the possibility of expanding the mobile ASC activities to other Lviv Oblast communities using the model of inter-municipal partnership is also being assessed.