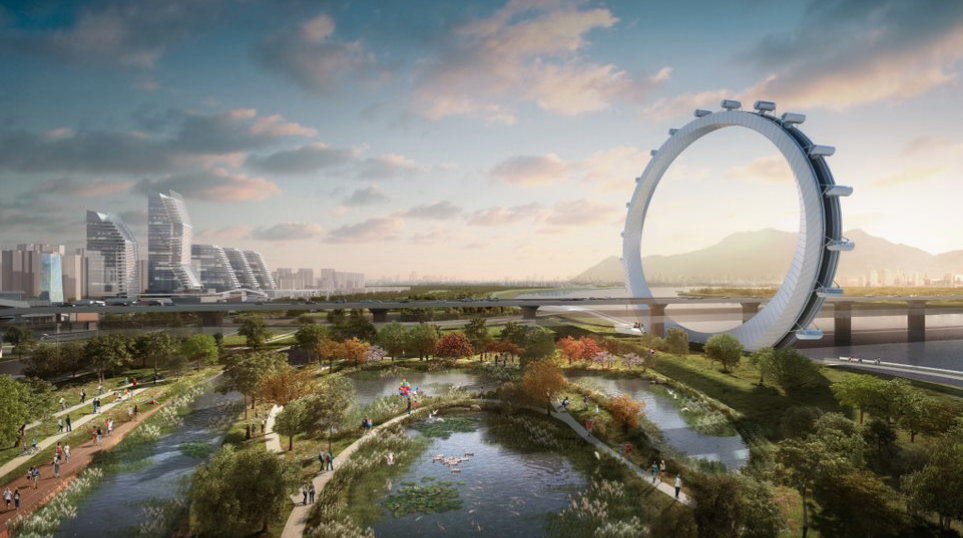 The bustling city of Shenzhen is home to 13 million people and one of the fastest urbanising cities in the world. However, rapidurbanisation across China and the world at large comes with major changes in urban hydrological and ecological processes,resulting in an increased risk of urban flooding. In 2014, Shenzhen experienced a period of heavy rain, later called a 50-yearflood event, which pulled the city to a complete stop - more than 200 areas were waterlogged, despite having 13,700 km ofbuilt sewers. The situation is likely to worsen as computer models predict that with climate change, although total annualrainfall will remain relatively unchanged, precipitation will be characterised by short duration and high intensity.

Sponge cities offer a simple natural solution to this urban problem. By shifting away from traditional “grey infrastructure” ofconcrete and, instead, building porous, permeable infrastructure such as green roofs, roads and gardens that mimic natureand absorb and retain rainwater for future use, Shenzhen hopes to reduce flooding while moving towards a more circulareconomy. The city has formulated a comprehensive multi-layer sponge plan and has created a standardised framework tocoordinate urban development with the requirements of sponge infrastructure.

In 2013, President Xi Jinping drew attention to the need to integrate rainfall retention into urban planning, considerablyendorsing the concept of a sponge city and making it visible to the public. The following year, the Ministry of Housing andUrban-Rural Development issued a set of technical guidelines for the implementation of sponge city initiatives. The StateCouncil of China also issued the national Guidelines on Promoting the construction of Sponge Cities. The governmentlaunched a 30-city pilot programme, and in 2016 the city of Shenzhen was selected to participate in the pilot. One year afterbeing selected, the first works started in the city to integrate sponge city initiatives into the city’s infrastructure. Five yearsafter the project was first launched, 26 sponge city plans and 1361 projects have already been completed, with a total of 276square km of urban area intervened.

The National Guidelines for Sponge Cities sets the target of sponge infrastructure at 20% of the urban area by 2020 and 80%by 2030. With a sponge infrastructure coverage of 28.3% of the urban areas, Shenzhen’s project has been successful and is inline to continue repurposing the city landscape. The application of the PPP model to fund projects, such as the PPP inGuangming district of Shenzhen, also provide insights into the future participation and interest from the private sector.