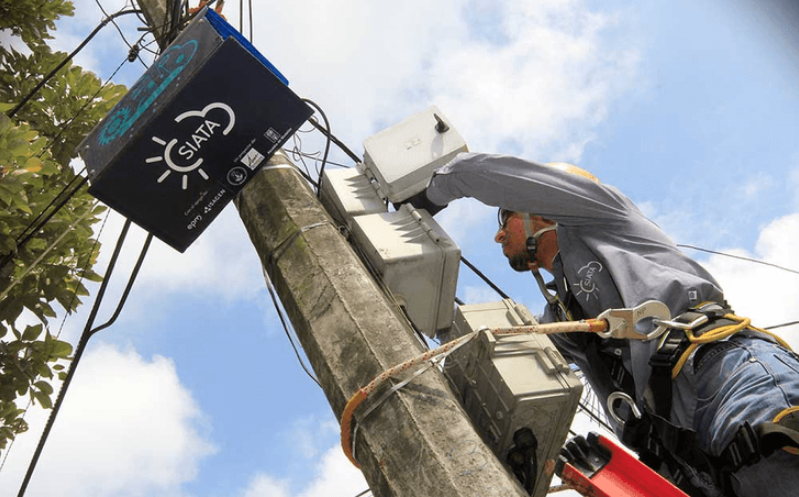 The Aburrá Valley is a river basin and a subregion in Colombia, with Medellin as its head city. Being one of the most populated valleys in Colombia,it has over 4 million inhabitants living in 10 municipalities. The Metropolitan Area of the Aburrá Valley (AMVA) is an administrative entity thatcoordinates and executes transit, environmental and urban policies across the region’s municipalities. Given its geographic location, the AburráValley is highly prone to heavy rains, electrical storms, landslides, forest fires and floods. For instance, from 2016 to 2019, there were 5577emergencies caused by natural disasters, affecting 5418 homes.

The Early Warning System of Medellín and the Aburrá Valley (SIATA) is an integrated environmental assessment and risk management tool thatcombines scientific knowledge, research, and technology to identify and predict natural and anthropogenic phenomena. This innovation providestimely alerts to the region’s inhabitants and municipal authorities. SIATA deploys sensors that feed real-time data on hydrometeorologicalvariables and atmospheric conditions to a central system through which the information is analyzed and shared with the relevant parties. Thedata is also used to create numerical and statistical modelling to understand and identify future risk. To make data accessible, SIATA designed amobile application and website where users can find the weather forecast, receive alerts, view precipitation patterns and access real-timeimages from the camera network. The initiative also integrates a communication and education strategy to increase community awareness andparticipation.

The project stems from an undergraduate thesis from three geologists at EAFIT University in Medellin seeking to measure precipitation patternsin the region. The idea was then presented before the Municipal Secretariat of the Environment, which undertook the project with low funding andlimited resources. With ongoing support from local government agencies and research universities, the initiative developed into an innovativeproject to improve the region’s risk management. Although it was not until 2010 that Aburrá Valley authorities took on the administration of theproject, from the early 2000s, community networks, local universities, and government authorities developed the initial foundations that led tothe consolidation of the project. From 2011 onwards, SIATA created a network of meteorological stations and installed new remote sensors,including a meteorological radar, the first of its kind installed in Colombia. In 2014 SIATA launched a mobile application to facilitate users’interaction with the data, and since then, it has continued to develop new initiatives, programs and technology to continue improving the system’scapabilities.

SIATA has a direct impact on communities located in areas prone to natural hazards. The alert system, however, has also been instrumental in theconstruction of large infrastructure projects, as managers can receive timely information about weather phenomena that could significantlyimpact construction plans. The innovation continues leveraging new research to develop and implement new systems, sensors, and models foraccurate data collection. Recent projects include a seismology group and an air quality monitoring network in 2016, fire monitoring throughthermal cameras in 2017 and the development of new sensors in 2020. SIATA also keeps advancing its community socialization strategy througheducation programs and campaigns in neighborhoods and schools.