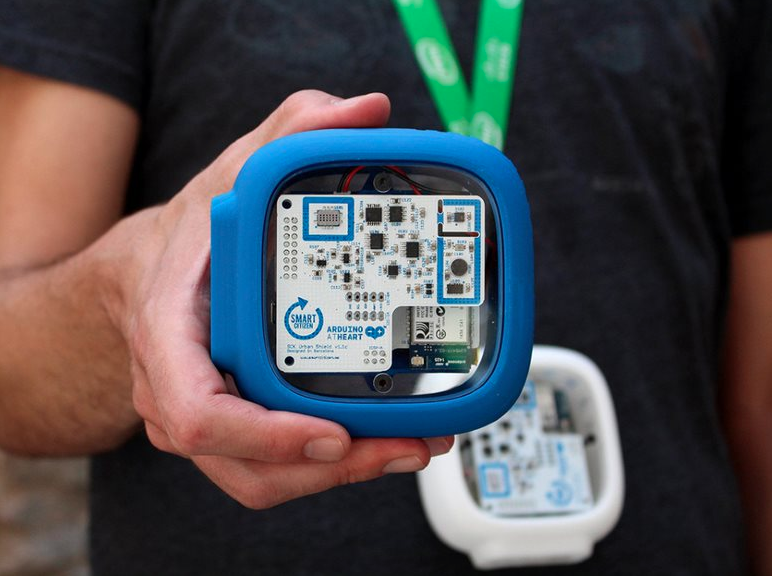 Idealistic smart city visions can be overwhelming for governments looking to transform their communities. They are often associatedwith costly IoT sensors and technocratic experts at the helm – but when citizens are equipped with the tools and skills to participate indata collection, thousands or millions of data points could potentially be leveraged by city researchers. With this vision in mind, theBarcelona Fab Lab innovation centre set out to develop a citizen science ecosystem to complement professional environmentaldatabases in Europe. With urban dwellers increasingly at the hands of contemporary urban health issues that were poorly documented –especially pollution and associated difficulties with breathing, allergies, and immune responses – citizen data was seen as pivotal tocampaigning for better government action based on evidence.

The Smart Citizen Project was first envisioned at the Fab Lab Barcelona, by researchers who believed in the power of data in spurringgreater political participation by ordinary citizens. The Smart Citizen Kit and accompanying data map interface was first piloted inAmsterdam in 2014, before it was reiterated and re-released, this time internationally.

The Smart Citizen Kit is an open-source hardware device offered to citizens, incorporating low-cost sensors which provide citizens withthe ability to measure various environmental indicators. At the heart of the Kit is the Urban Sensor Board, containing modular hardwarecomponents which measure air temperature, relative humidity, noise, barometric pressure, ambient light, and particulate matter (PM).Citizens place the Kit in an outdoor location of their choice – such as a balcony, windowsill, or atop a building – and it detects andstreams the environmental data using WiFi to SmartCitizen.me. SmartCitizen.me is a custom crowdsourced digital map of environmentaldata collected via the use of Smart Citizen Kits – not just in Amsterdam, but now around the world. The Kit has been developed withreproducibility in mind, ensuring that it remains low-cost and accessible even as it scales in use. The Urban Sensor Board is also able toaccommodate the addition of a variety of third party sensors to measure other environmental indicators, such as the Smart CitizenStation, a full solution for low-cost air pollution monitoring. With these extendable capabilities, the Kit serves not only as a sensordevice, but as a potential base solution for more complex urban challenges.

Having first piloted the Smart Citizen Kit in Amsterdam with 100 participants/kits in 2014 for three months, the Kit has since beenfurther developed by the Barcelona Fab Lab. Its second iteration was again piloted, this time as part of the European Making SenseProject, and is now available for purchase worldwide. There are now over 1900 unique kits around the world contributing to theSmartCitizen.me data map, and some 9000 registered users.