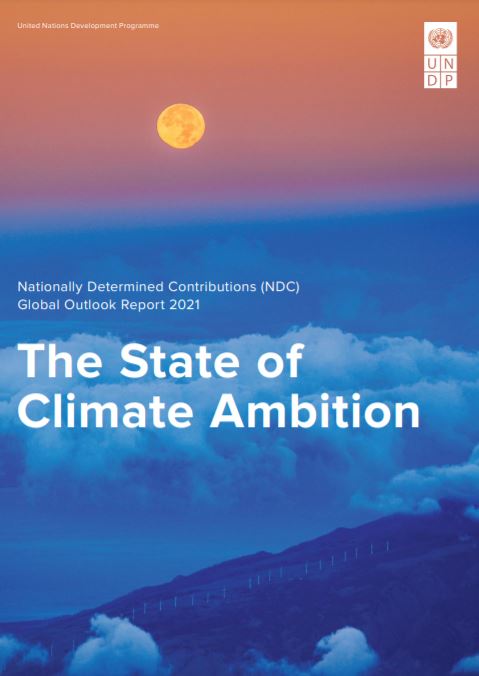 Against a backdrop of increasing scientific concern and public awareness about the climate crisis, UNDP set out to review if policymakers were keeping the promises they made in 2019 when the global state of climate ambition was assessed with UNFCCC in the first NDC Global Outlook report, The Heat is On. We were curious. Is the Paris Agreement working? And if yes, then who is doing the work? Which countries are leading the way on ambition – and which ones are falling behind?

UNDP had also launched the Climate Promise initiative at the UN Climate Ambition Summit in September 2019 as a commitment to ensuring that lack of funds and/or capacity would not be a barrier for any developing country that wished to prepare a more ambitious national climate pledge, or NDC. The Climate Promise quickly became the world’s largest offer of support to countries for the NDC revision process.

At that time, there was no warning that the world would soon be facing a global health pandemic and that UN climate negotiations would be postponed a full year to November 2021 in Glasgow. But even as countries began to indicate that they would miss the original UNFCCC deadline of December 2020 for submission of so-called “second-generation” NDCs, the intentions of Climate Promise countries to submit more ambitious climate pledges kept growing.

The key findings presented here unpack the concept of “ambition” against reality on the ground, drawing upon UNDP analysis and experience in Climate Promise countries. Do higher-quality NDCs result in more ambition? Do more inclusive approaches to NDC revision lead to greater ambition? Did the COVID-19 pandemic impact countries’ intentions? And what opportunities are emerging to accelerate NDC implementation?

On the surface, the overall global trend of climate ambition appears promising. A key principle of the Paris Agreement adopted in 2015 was that nations would “ratchet up” their efforts to combat climate change every five years. The aim is to demonstrate a progression beyond the previous pledge, and to reflect a country’s “highest possible ambition.” 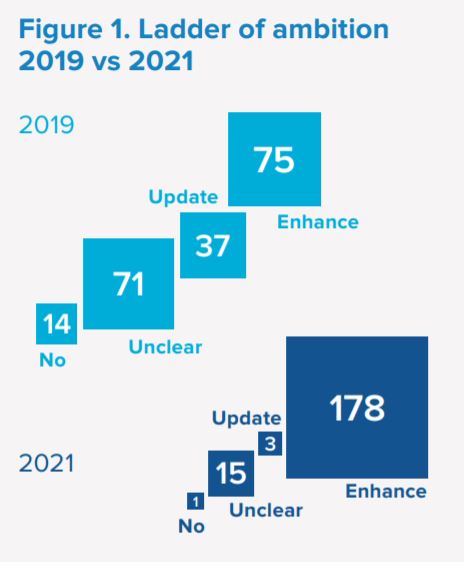 Figure 1 compares global ambition intentions in 2019 to 2021. The number of countries intending to enhance their NDCs – either by increasing their GHG emission reduction targets and/or by strengthening their adaptation goals – rose from 75 countries in 2019 to 178 in 2021. In 2019, 37 countries planned to update without raising ambition – ultimately, only three have done so. The unclear and/or no information category fell from 71 countries in 2019 to 15 in 2021, showing that even amidst one of the most devastating global health crises, countries continued to define their climate pledges. Finally, the number of countries with no intention to submit currently stands at only one, compared to 14 in 2019, many of which included some of the world’s major emitters.

Another positive trend is the increasing ratification of the Paris Agreement: Angola, Kyrgyzstan, and Lebanon ratified the Paris Agreement in 2020 and South Sudan and Turkey in 2021, while Iraq is well-advanced towards that aim. This leaves only four countries out of 197 still pending: Eritrea, Iran, Libya, and Yemen. For all UNFCCC ratification dates, see here.

The COVID-19 health pandemic left most countries grappling with the timing of their NDC submissions, as government priorities shifted to minimizing the economic fall-out and human impact of a world in lockdown. Despite this major challenge, as of 12 October 2021, 143 countries had submitted second-generation NDCs to the UNFCCC (including four interim NDCs) – a significant increase from the two that had been submitted by September 2019. It is anticipated that 38 more countries will submit NDCs by the end of 2021, with the majority still aiming to do so by the COP26 negotiations in Glasgow in November. As shown in Figure 3, this would bring the total number of submitted second-generation NDCs to 181 – representing 92% of all Parties to the Paris Agreement.

The timing of NDC submissions aligns strongly with deadlines established by the UNFCCC for the inclusion of NDCs in the NDC synthesis report. At the end of 2019, four countries had submitted second-generation NDCs, but by December 2020 – which was when COP26 was initially expected to take place – 67 more countries had made submissions, of which 84% were submitted in Q4. Similarly, in 2021, 40 countries submitted NDCs (excluding interim submissions) by the UNFCCC deadline of 30 July for inclusion in its synthesis report and an additional 32 countries made a 12 October deadline to be included in an update to the report.

… but the world needs even greater ambition and faster action 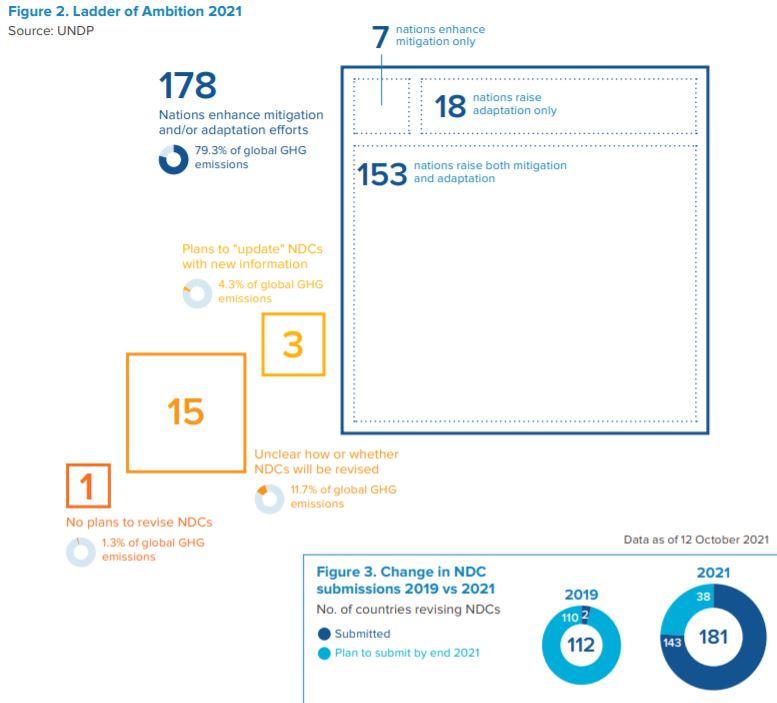 The updated ladder of ambition for 2021 (Figure 2) shows the potential significance of having 90% of the world submitting, or planning to submit enhanced NDCs to the UNFCCC. In total, these 178 nations are responsible for nearly 80% of global GHG emissions. Figure 2 unpacks country intentions further by examining whether these 178 countries are pledging to raise mitigation ambition – that is, are outlining commitments in their NDCs to curb their emissions of the GHGs that cause global warming – or more focused on ramping up their plans to adapt and become more resilient to climate impacts. As shown, 90% have raised mitigation ambition, or plan to do so, while 97% are incorporating stronger adaptation goals. A small subset have focused solely on strengthening either mitigation or adaptation plans, but not both. Figure 2 also shows that the three countries that are updating their climate pledges but not raising ambition represent only 4.3% of global GHG emissions. As of 12 October, only one higher-emitting country had not signaled any clear plans to submit an enhanced NDC. For the remaining 15 countries where intentions are unclear, or no information is currently available (representing 11.7% of global GHG emissions), there is still a possibility that more ambitious NDCs could be put forward.

Nonetheless, despite this progress, the latest analyses of NDCs reveal that much greater ambition is needed across the board. The UNFCCC (2021) reports that global emissions will be 16% higher in 2030 than they were in 2010 based on current climate pledges – far from the 45% reduction by 2030 needed to limit warming to 1.5°C. UNEP (2021) similarly acknowledges that while countries show some progress in their new climate pledges, the aggregate effect on global emissions is disappointing.

Climate ambition is nuanced and context-specific

However, beneath the surface of these promising trends lies a more nuanced picture of climate ambition. This report dives into what ambition looks like through the lens of countries’ NDCs and the revision processes that defined them. Specifically, we find that:

This report makes clear that higher-quality NDCs and more inclusive processes are underpinning ambition goals, but developing countries still require significant support to deliver on their targets. Finance remains a fundamental barrier to NDC ambition and acceleration of climate action in developing countries. Developed economies must therefore address their financial obligations in this context, while the G20 must show much greater leadership by acting urgently and boldly on climate action if the world is to have any hope of achieving the Paris Agreement’s global goals. Finally, truly transformational change does not happen without change-makers; those most impacted by the climate crisis – and by climate solutions – must have a seat at the table.