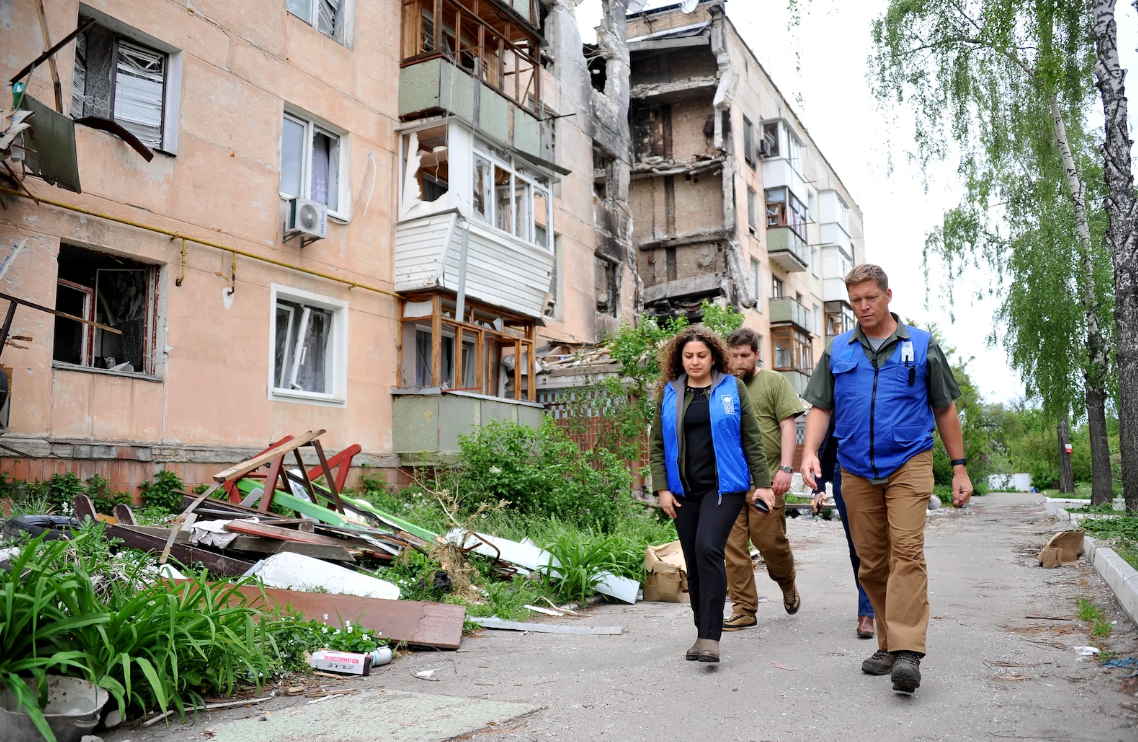 Originally posted by UNDP on 2 July 2022

“It is still terrifying to bring kids here.”

Olexander Krushynskii lives in Bucha in Kyiv Oblast, 25 kilometres west of the capital. The terrifying place he speaks of is a children’s play area. “We have no idea what the situation at the playgrounds is. There are many more locations where shells and mines are being found.”

Following the withdrawal of Russian forces, many residents who had fled the fighting are coming home to cities and towns like Bucha, eager to resume their normal lives. One of the major obstacles they face is the unknown number of landmines, cluster munitions and other explosive ordnance left behind in the war. Clearing away these explosive remnants of war – along with the mountains of rubble left by the fighting – is a critical step in the early recovery process.

About 25 percent of Ukraine’s territory has been affected by the war. The cost from damage and destruction of buildings and infrastructure is estimated at over US$100 billion. Photos: UNDP Ukraine/Oleksandr Simonenko

“The challenge we are facing now is the demining of the surrounding forests and fields,” says Taras Dumenko, head of the administration in Hostomel village. “Also, the removal of debris, restoration of the residential infrastructure and of residential buildings.”

Local authorities estimate that around 1,800 buildings were destroyed. “We are facing enormous hardship right now, because Hostomel is 50 percent destroyed,” resident Oleksandr Nevychenko says. “The community where I live is 90 percent destroyed.”

About 25 percent of Ukraine’s territory – roughly 160,000 square kilometres – has been affected by the war. The cost to Ukraine’s economy from damage and destruction of residential and non-residential buildings and infrastructure is thought to be over US$100 billion.

According to UN estimates, about 14.5 million people in Ukraine are living in areas contaminated with explosive ordnance. Photos: UNDP Ukraine/Oleksandr Simonenko

“The priority is to enable the safe return of civilians,” says Oleksandr Sushchenko, Team Leader for Energy and Environment with UNDP Ukraine, who works on a demining and debris removal project focusing on towns around Kyiv.

The State Emergency Services of Ukraine is a critical player in making streets, forests and playgrounds safe for civilians. Since March 2022, the SES have cleared close to 150,000 items of explosive ordnance left in the conflict.

“The Emergency Service is creating 80 new demining units [approximately 400 staff], but there are problems with equipping these units,” says Yevhen Kyrychenko, a representative of the SES. “One such unit should have at least two pieces of equipment and protective clothing for the staff and the engineering equipment for demining. We also really need specialized engineering equipment for the removal of construction debris.”

Since March 2022, the State Emergency Services of Ukraine have cleared close to 150,000 items of explosive ordnance left behind in the fighting. Photos: UNDP Ukraine/Oleksandr Simonenko

Even as the war continues, UNDP is working closely with the Government to put in place the foundations for recovery and reconstruction, because recovery and resilience building can’t wait until the fighting stops. These early actions are critical for preserving the country’s hard-won development gains as much as possible.

A big part of the equation is making it safe for some of the almost 12 million people who have been forced from their homes – approximately 6.3 million are internally displaced, while more than 5 million are refugees outside Ukraine’s borders – to come home again. Spontaneous homecomings have started, with 5.5 million Ukrainians returning from other regions of Ukraine and abroad.

Clearing away these explosive remnants of war is a critical step in the early recovery process, making it safe for those who fled the fighting to return. Photos: UNDP Ukraine/Oleksandr Simonenko

Mapping and removing explosive devices is a top priority, as is clearing debris from destroyed buildings and infrastructure and addressing the large number of damaged and unstable structures at risk of uncontrolled collapse. In Irpin, a town north of Kyiv, UNDP teams have assessed 410,000 tonnes of rubble requiring removal. Roads must be cleared and some buildings demolished to make areas safe for reconstruction and to open access routes for humanitarian assistance.

Comprehensive area-based recovery planning is critical to create a safe environment for those wishing to come home, UNDP’s acting Resident Representative in Ukraine, Manal Fouani, said during a visit to Hostomel. “It’s important that we listen to people’s needs, we prioritize and plan with government authorities, with civil society, and all active stakeholders and we connect to the national recovery and development plan that the government is putting in place,” she said.

Like the recovery work itself, Hostomel resident Nadiya Dovhopola can’t wait. “I hope our city will recover as soon as possible, and the school rebuilt quickly,” she says.

Demining and debris clearance must respond to this sense of urgency, yet it cannot ignore sustainability concerns. Removed rubble is sorted, processed and screened for contaminants. When safe, it can be reused for quick repairs and green reconstruction, cutting costs and reducing the strain on natural resources. The process also injects money back into the economy and helps to build back the cities better and greener than before.

“I see the future of our community,” Hostomel administration head Taras Dumenko says. “It will be a blooming suburb of Kyiv, an example not only for Ukraine, but also for the whole world. It will rise like a Phoenix from the ashes, and shine with new colours.”

Footnotes: UNDP is the lead UN agency for mine action in Ukraine and has been supporting demining work in the country since 2016. Our work on mine action coordination, emergency explosive ordnance clearance and debris removal is made possible by contributions from the Governments of Canada, Japan, the United Kingdom and the European Union.