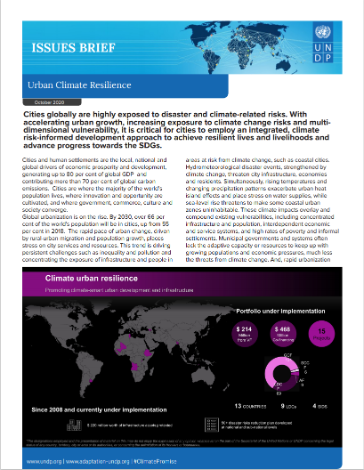 Cities globally are highly exposed to disaster and climate-related risks. With accelerating urban growth, increasing exposure to climate change risks and multi-dimensional vulnerability, it is critical for cities to employ an integrated, climate risk-informed development approach to advance resilient lives and livelihoods and achieve progress towards the SDGs.

Cities and human settlements are the local, national and global drivers of economic prosperity and development, generating up to 80 per cent of global GDP and contributing more than 70 per cent of global carbon emissions. Cities are where the majority of the world’s population lives, where innovation and opportunity are cultivated, and where government, commerce, culture and society converge.

Global urbanization is on the rise. By 2030, over 66 per cent of the world’s population will be in cities, up from 55 per cent in 2018. The rapid pace of urban change, driven by rural-urban migration and population growth, places stress on city services and resources. This trend is driving persistent challenges such as inequality and pollution and concentrating the exposure of infrastructure and people in areas at risk from climate change, such as coastal cities.

As cities face increasing growth in a future with heightened risk and vulnerability to climate change, such a broad multi-sector systems approach to strengthening resilience is necessary. Strengthening city resilience can have regional effects as rural value chains and economies often supply cities with resources and are reliant on urban areas for services and market access. And, urban resilience is not just about climate change, but is critically linked to efforts to reduce poverty, enhance energy efficiency and low-carbon transportation and infrastructure, streamline waste management, public health, and achieve all of the Sustainable Development Goals (SDGs).