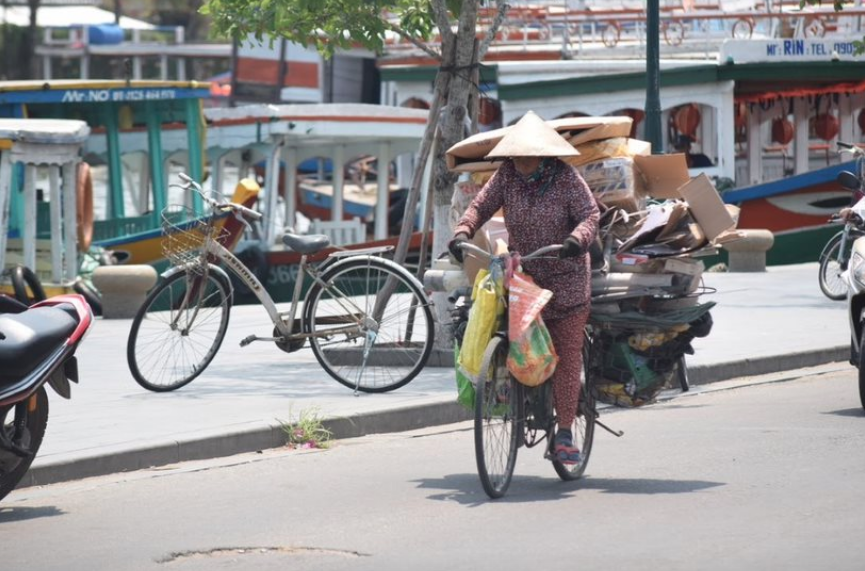 Da Nang is a thriving urban hub in Vietnam, known for its flourishing tourism, business, and culture. But with a growing urban population, wasteproduction is rocketing, and the absence of a municipal recycling framework leaves most of Da Nang’s waste en route to landfills, or intowaterways and the environment. Seeing the potential for value creation along the waste cycle, informal waste workers or ve chai have emerged,buying waste from households and scavenging for recyclables from streets. By trading these materials with end-buyers (often factories orrecyclers), ve chai have found a flexible source of income whilst contributing to a robust informal recycling system. However, despite plugging acrucial gap in waste management and recycling, ve chai are not formally recognized by the state, owing to their informal and often misunderstoodline of work – excluding them from official safety nets in times of crisis.

Whilst examining the problem of waste management and pollution in Da Nang, the UNDP Vietnam Accelerator Lab recognised the role of ve chai inthe local informal waste network. The Lab’s initial efforts, for instance in introducing new recycling bins, were met with discontent from ve chai.Given the lack of substantive research on waste in Da Nang, the Lab decided they required a firsthand understanding of local waste collectiondynamics to better inform a solution. The Lab’s work with innovation research and networks with other Labs made available a host ofmethodologies to consider. This included a Collective Intelligence approach first popularized by Dietmar Offenhuber, who used it precisely to mapthe informal waste sector earlier in Brazil. This led to the idea of a similar waste mapping exercise in Da Nang: one that better uncovered local vechai’s motivations and role(s).

In partnership with Evergreen Labs, a social enterprise working with ve chai on research and upcycling efforts, the Accelerator Lab embarked onefforts to map the waste sector. A Collective Intelligence approach made use of a combination of GPS route tracking efforts and field interviewswith ve chai. Volunteers were tasked to follow ve chai on their daily routes, tracking their stops, activities, and engagements with other actorseither via a GPS device, or by tracing them manually on a physical map. This data helped reveal the entrepreneurial nature of ve chai, most of themworking as individuals to build their own business contacts and networks (whether with household waste providers or waste aggregators). A totalof 221 waste collection points were identified in the study area, and by visualising this data on a GIS platform, UNDP Vietnam was able todemonstrate how well-distributed waste collection services by ve chai were, covering more than 80% of the city’s geographical area. It wasdiscovered that ve chai collect a collect a significant 4.3%-7.5% of the total solid waste generated in the city – when estimates of total recyclingrates in the city were at 8%.

This initial mapping exercise helped establish that there were an estimated 1,000-1,800 informal waste collectors working in Da Nang. Being ableto demonstrate this on a GIS platform, alongside their estimated contributions to recycling rates, diverted the government’s initial plans toprovide citizens with recycling bins, which would adversely affect ve chai and disrupt existing successes in recycling via ve chai’s efforts. Thisstudy has contributed to wider efforts by UNDP Vietnam to embark on Circular Economy efforts in the country, which have hence seen greatervisibility in the policy space. These efforts have also attracted international support, such as support from the Government of Norway in equippingve chai with occupational health gear.