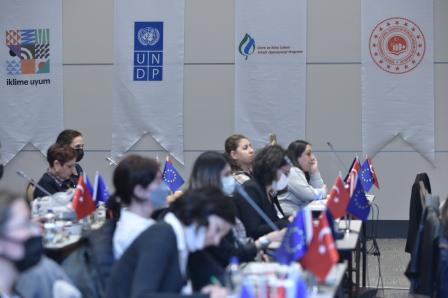 UNDP’s efforts to strengthen climate change adaptation, particularly at sector and urban level, and build societal resilience in Turkey, continue. Within the scope of Local Adaptation Strategy and Action Plan preparations, stakeholders were met in Konya on 16-17 May and in Sakarya on 30-31 May at consultative meetings. Representatives of public institutions, private sector, academia, civil society, and municipalities attended the meetings organized within the scope of development of climate change adaptation plans at the local level to identify and prioritize adaptation actions for each sector.

As part of the preparations for the National Adaptation Strategy and Action Plan (NASAP), stakeholders were met on 18-22 April in Ankara for the same purpose at the national level.

Turkey prepared the first NASAP in 2011. UNDP, in coordination with the Ministry of Environment, Urbanisation and Climate Change (MoEUCC), currently pursues efforts to update the plan by the end of 2023. UNDP also prepares urban adaptation strategies and action plans for 4 pilot municipalities, Konya, Muğla, Sakarya, and Samsun.

As adaptation efforts in the face of climate change are delayed, climate adaptation will be more difficult and costly. Therefore, national and local adaptation strategies and action plans play a crucial role. NASAPs and Local Adaptation Strategy and Action Plans are one of the most important mechanisms for adapting to climate change. They seek to identify the short and long-term adaptation needs through strategic planning based on projections of future climate change.

The planning process includes preparing the ground for adaptation, assessing vulnerabilities and risks, identifying and prioritizing adaptation options, implementing actions, and tracking progress and results. Updating and having an adaptation plan aims to make people, places, ecosystems, and economies more resilient to the impacts of climate change and respond to the adaptation needs of the sectors. A similar understanding applies to local action plans.

Climate Change Adaptation Grant Programme (CCAGP) aims to strengthen adaptation actions to climate change in Turkey. The total amount of funds allocated for the projects to be supported under the programme is EUR 6.8 million, announced in 2020. The deadline for full applications was 29 April 2022 for projects that passed the preliminary evaluation process. Project owners who are successful in the evaluation will be entitled to receive a grant, and the projects are expected to start in March 2023. Accordingly, training regarding the full application evaluation process was held on 25 April 2022 for the related staff of the MoEUCC.

The objective of the Grant Programme is to enhance climate change adaptation in Turkey, improve the resilience of communities and cities, protect natural resources and ecosystems and enhance the adaptation capacity of vulnerable economic sectors.

UNDP, in cooperation with the Republic of Turkey and the European Union, continues to support reducing vulnerability to the impacts of climate change and facilitating the integration of climate change adaptation into relevant new and existing policies, programmes, and activities, particularly development planning processes, and strategies.