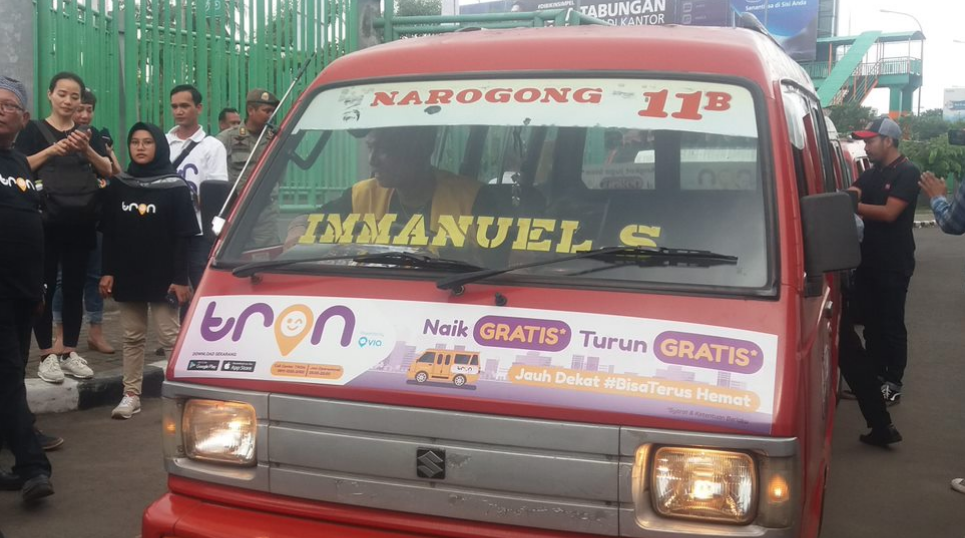 Jakarta, like many of its Southeast Asian counterparts, suffers from severe traffic congestion – costing the Indonesianeconomy an estimated $4.5 billion a year. The city’s overstretched public transport systems have made ride-hailing popularamongst citizens, with Indonesians being the world’s second-heaviest users of ride hailing apps (Global Digital Report, 2019).Many of Jakarta’s citizens rely on angkots, shared van-taxis with a capacity of 10 to 15 persons, for their daily commute – theirflexibility a bo Against this backdrop, US-based firm Via collaborated with TRON to provide technologically advanced mobilitysolutions that were adapted to Indonesia’s local angkots, to improve the transit system in Indonesian cities.

Via Transportation, Inc. is a leading global developer of on-demand shared mobility solutions, and approached Bekasi city aspart of efforts to enter the Indonesian market. The venture was favourably received by the Bekasi city government, havingthemselves launched a smart city unit in 2016 as part of wider national efforts to prioritise digital transformation in publicservices. Leveraging Southeast Asia’s growing ride-hailing market, Via carved out a space in the market for itself by focusingon angkots. Angkots were a relatively neglected mode of transport in the ride-hailing industry albeit their ubiquity in theIndonesian urban landscape, ensuring Via did not oversaturate the market while tapping on existing local practices andresources.

In 2019, Via launched the app TRON app, facilitating the ordering of angkots in Bekasi, a city in the east of Jakarta. Initially,TRON operated as a point-to-point service, as with standard public buses. However, by adapting its fleet managementsolutions from other similar ventures, Via soon managed to re-mould TRON such that it operated as an on-demand service,experimenting with a more novel approach to public transit instead of duplicating existing efforts. Based on pick-up requests,TRON algorithmically charts dynamic routes and directs angkot drivers and passengers to a suitable pick-up point (a virtual‘bus stop’). This tracking approach allows commuters to avoid walking long distances to find and hail an angkot, whilst driversare also assured of customers. Furthermore, up to 15 people can share a ride, while avoiding the rigidity of fixed public busroutes. To avoid congestion and unsafe conditions at these virtual bus stops, angkots are also scheduled to depart within 1 to 3minutes from each stop. The option to pay for angkot rides using the TRON app itself reduces the hassle of exchanging cashwith drivers. Furthermore, with the economies of scale of such a large-scale enterprise venture, fares on TRON angkots arefixed, and hence often more affordable than the surge pricing rates offered by angkots hailed on roads.

Having first launched with just 15 angkots, TRON has now accumulated over 1000 member drivers in Bekasi.